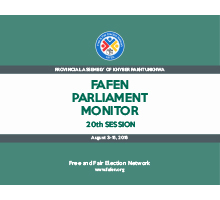 The House passed six government bills and adopted eight resolutions during the entire session, comprising six sittings. The session started on August 3, 2016 and concluded on August 15, 2016. On average, each sitting started 35 minutes behind the schedule and lasted an hour and 47 minutes.

Interestingly, none of the resolutions adopted by the House was on the List of Business. According to Rule 124 of the Rules of Procedure of the KP Assembly, a Private Member, who wishes to move a resolution, shall give fifteen days’ notice of his intention to do so and shall submit, together with the notice, a copy of the resolution which he intends to move. However, the members frequently took the advantage of Rule 240, requesting the Speaker to suspend the relevant rules and accommodate their resolutions.

According to FAFEN’s observation of the Assembly proceedings, the lawmakers’ attendance remained low throughout the session – with an average of 34 (25%) members present at the start and 43 (35%) at the end of each sitting. The quorum was pointed out thrice and found complete on one occasion (1st sitting), while it was found incomplete during the fifth sitting and the proceedings could be resumed only after the prayer’s break. The sixth session was prorogued sine die without completing the agenda due to lack of quorum.

The Speaker and the Deputy Speaker remained present in five sittings and presided over 78% and 18% of the entire proceedings, while four percent of the session time was consumed in breaks. Among the parliamentary leaders in the House, JI leader attended five sittings followed by PML-N & ANP (4 sittings each) and PPPP & QWP-S (3 sittings each).

The House took up eight Calling Attention Notices (CANs) addressed to the Ministries of Health, Irrigation, Housing and Works, Law and Planning and Disaster Management.

Meanwhile, the House adopted eight resolutions. Two of them condemned the terrorist attack in Madina Munawara, suicide attack in Balochistan and killing of the Quetta Bar President. The remaining six resolutions demanded of the government to resolve problems of the Overseas Pakistanis in Saudi Arabia; to ban usage of objectionable material or derogatory language on social media; to declare July 8 as National Charity Day in connection with the passing away of eminent social worker Abdul Sattar Edhi; to implement riba-free system in the country; to avoid usage of short abbreviations for Islamic names and Holy places and to give autonomy to the Khyber Pakhtunkhwa over tobacco related issues for being largest tobacco production province.

The lawmakers raised 13 Points of Order that consumed 29 minutes of the session’s time. Out of 29 Starred Questions, only eight (28%) were taken up and responded to by the relevant ministries/departments. The legislators also raised three Supplementary Questions to gain further clarity on the government’s responses.

Two instances of walk out were witnessed during the session. The entire opposition staged a walkout for 12 minutes during the fourth sitting when the chair did not allow an ANP lawmaker to speak on KP Local Government (Amendment) Bill, 2016. Similarly, the opposition lawmakers staged another walkout during the last sitting against the Leader of the House who allegedly did not give them time to listen to their grievances on funds related issues despite his prior commitment. Their walkout led to lack of quorum and announcement of the prorogation of the session.