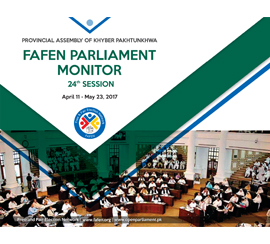 ISLAMABAD, May 25, 2017: The Khyber Pakhtunkhwa (KP) Assembly took up heavy legislative agenda during 14-sitting session held between April 11, 2017 and May 23, 2017. It passed 17 bills, including four private members’ bills, adopted nine resolutions after suspending rules and referred two bills to the relevant committees for further deliberations.

With an average of 36 lawmakers (29% of the total membership – 124) present at the start and 32 members (26%) at the end of each sitting, the 24th session of the provincial assembly transacted most of the agenda appearing on Orders of the Day. A maximum of 53 (43%) members, on average, attended the session along with the presence of one minority legislator. The quorum was pointed out eight times during the session while the Chair had to adjourn the sittings on five occasions. One sitting remained suspended for 10 minutes and the quorum was found complete upon counting on two occasions.

The House observed heavy legislative agenda and passed 17 bills. Rules were suspended several times to accommodate non-agenda items, especially the resolutions, as the Assembly adopted nine resolutions during the reporting period. None of the adopted resolutions was on the List of Business.

According to Rule 124 of the Rules of Procedure of Khyber Pakhtunkhwa Assembly, a Private Member, who wishes to move a resolution, shall give 15 days’ notice of his intention to do so and shall submit, together with the notice, a copy of the resolution which he intends to move. However, the members frequently took the advantage of Rule 240, requesting the Speaker to suspend the relevant rules and accommodate their resolutions.

Low interest of lawmakers was observed during oversight of the executive, as 53 percent starred questions were lapsed due to the absence of lawmakers or relevant ministers. However, the House took up 13 out of 17 Calling Attention Notices (CANs) appearing on the Orders of the Day.

The House passed nine resolutions to condemn attacks in Syria, ensure legislation to stop circulation of blasphemous content on the social media, demand resignation of the Prime Minister in the wake of Supreme Court’s decision in Panama Papers case, appointment of female staff at NADRA offices in Hazara division and south districts of KP, construct an overhead bridge in Abbottabad under CPEC, compensate the affectees of Sukhi Kinari Dam, start PIA flights from Peshawar to Lahore on daily basis; ensure PIA’s compliance with the flights schedule and hang the Indian spy Kulbhushan Yadev for his involvement in espionage activities and terrorism in Pakistan.

Of 17 CANs appearing on the Orders of the Day, the House took up 13, among these three were not taken up while one was withdrawn by the mover. The taken up CANs were related to TMA employees’ strike in Bannu; retention of Area Director Center at Peshawar University despite court’s order; killing of laborer by a landlord in remote area of Buner district; restoration of male mobilizers in Population Welfare Department; notification for expanding jurisdictions of the Forest Institute; implementation on KP Whistleblower Protection and Vigilance Commission Act 2016; non-completion of Jalozai Housing Scheme; closing certain primary schools in the province; poor drainage system in a Degree College at Charssada; review of educational curriculum; regularization of the services of employees at Regional Blood Center in Peshawar; corruption charges against Deputy Commissioner Tank and recruitment of IT teachers and Lab In-charges in the Education Department against sanctioned posts.

Sponsored by PPPP lawmaker, the House discussed an Adjournment Motion (AM) to revise the scale of staff at Union and Village Councils. Six lawmakers, two of QWP and one each of PPPP, JI, ANP and PML-N, spoke on the motion for 18 minutes. The Chair admitted an AM for debate regarding inquiry report of the government on corruption in Bank of Khyber, its performance and illegal appointments made.

The lawmakers raised 27 Points of Order (POs) consuming an hour and 54 minutes. Out of 163 Starred Questions, 76 questions (47%) were taken up and responded to by the relevant ministries/departments, while the legislators raised 62 supplementary questions to gain further clarity on government’s responses. Of the total starred questions, 23 were related to Elementary and Secondary Education Department, followed by Health and Finance Departments (15 each), Communication & Works and Environment Departments (14 each) and Irrigation and Local Government Departments (11 each).

Two privilege motions – one each submitted by PTI and JUI-F lawmaker – against the government officials were referred to the relevant committee. The House did not consider another privilege motion of a PTI lawmaker.

Three instances of walk outs were witnessed during the session. A JUI-F lawmaker staged a walkout for two minutes during the 6th sitting over ministerial absence in the House while the same sitting witnessed another walkout for 25 minutes by the opposition lawmakers for not being allowed to move a resolution against PTI lawmaker, who used objectionable language against women.

Similarly, the opposition lawmakers staged another walkout for 12 minutes during eighth sitting over non-availability of hard copies of the List of Business in the House.

The entire opposition protested within the House for 10 minutes during 3rd sitting on the passage of resolution against Prime Minister. The opposition benches also protested for seven minutes during 5th sitting over unjustified distribution of development funds. Two protests were witnessed during 6th sitting for three minutes each. The first protest was against the use of objectionable language against women while the other was against denying permission by the Chair to speak on a Point of Order.

The House witnessed presentation of 10 reports by various committees and adoption of a report of Standing Committee on Procedure and Conduct of Business Rules, Privileges and Implementation of Government Assurances.