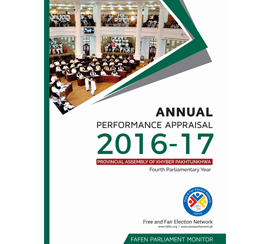 ISLAMABAD: The Provincial Assembly of the Khyber Pakhtunkhwa (KP) registered an increase in its annual working hours, participation of lawmakers, legislative output and the executive oversight during the fourth parliamentary year. However, no improvement was seen in the attendance of lawmakers, adherence to the Assembly’s schedule and the conduct of legislators in the House when compared with the preceding year.

During the reporting year, the Assembly held 56 sittings and met for 95 hours and 18 minutes, showing 69 percent increase in the duration of proceedings. The time consumed in various breaks registered a decline from 13% to five percent, while the number of non-participating lawmakers in the House decreased from 32 to 19 legislators. On the other hand, the bills and the resolutions passed during the reporting year witnessed an increase of 78% and 29%, respectively. Similarly, the lawmakers asked 347 questions as compared to the last year’s 187 questions.

The attendance of the lawmakers did not improve from an average of 71 lawmakers (58%) per sitting over the last two years. The Leader of the House attended 29% sittings during the third and the fourth parliamentary years. His attendance was recorded highest (51%) during the first year of the Assembly. Moreover, the commencement of the proceedings continued to witness long delays. The average delay in the scheduled time of sittings increased from third year’s 29 minutes to 35 minutes this year. The lawmakers staged 21 protests and identified quorum 31 times during the reporting year. These figures are three times higher than the protests and quorums recorded during the preceding year.

The House passed 48 pieces of legislation, including eight Private Members’ bills. The legislation mainly focused on setting up new institutions and introducing administrative changes in various public-sector organizations while other subjects included health, education, transparency and judiciary. The Assembly also passed bills to validate the appointments and regularize the services of the government employees in health, transport, information technology and irrigation departments. The provincial local government law was also amended five times during the year. Moreover, the Assembly approved the landmark legislation on the prevention of conflict of interests of public office-holders and the protection of whistleblowers. The lawmakers increased their salaries as well as those of the Speaker, Deputy Speaker, Chief Minister and the Cabinet Members.

The House, through 49 resolutions, made recommendations to the federal and provincial governments on various issues related to the China Pakistan Economic Corridor (CPEC), governance, aviation’s operations in the province, electoral reforms, FATA reforms, education, parliamentary affairs and the international affairs. The House also reaffirmed its resolve to fight terrorism and condemned the incidents of terrorism in Quetta and the Holy City of Madina. On women legislators’ motion, the House adopted a resolution to condemn the increasing trend of violence against women.

The lawmakers performed the executive oversight and public representation by raising 347 questions, 71 Call Attention Notices and six Adjournment Motions during the reporting year. The House took up 151 questions, 37 Call Attention Notices and all Adjournment Motions to seek treasury’s response on the issues of public importance.