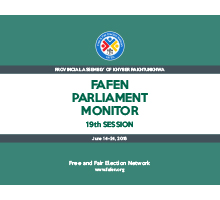 The 19th session of the Khyber Pakhtunkhwa (KP) Assembly was marked by the passage of the Finance Bill 2016 amid low interest of lawmakers in budget debate as well as proceedings of the House, says the Free and Fair Election Network (FAFEN).

Ninety-two members (75% of the current membership – 123) did not contribute to the budget debate. Twenty-one of them were female legislators while 71 were male lawmakers. Ten female lawmakers were from PTI followed by JUI-F(3), PML-N and QWP-S (2 each) and one each of AJIP, ANP, JI and PPPP.

Minister for Finance presented the annual budget 2016-2017 as well as the supplementary budget statement for the year 2015-2016 during the first sitting. He took 104 minutes to present the budget. The Leader of the Opposition opened the Budget debate in the second sitting and spoke for 52 minutes.

The House passed the Khyber Pakhtunkhwa Finance Bill, 2016 during 6th sitting and several treasury members left the House when the motion was being moved to pass the Finance Bill. Their absence was also noted by the Chief Minister who announced to initiate an enquiry against them. The House approved 59 demands for grants for the year 2016-17 and rejected 953 cut motions on them while 50 supplementary demands for grants for the year 2015-16 were approved by setting aside 292 cut motions on them.

The session, comprising eight sittings, started on June 14 and ended on June 24. On average, each sitting started 15 minutes behind the schedule and lasted two hours and 17 minutes with 47 lawmakers (38%) present at the start and 51 (41%) at the time of adjournment.

Among parliamentary leaders, the QWP-S leader attended eight sittings followed by JI and ANP (7 each), PML-N (4) and PPPP (one). Only two points of order were raised in the session consuming only two minutes. The quorum was pointed out twice during the session. During the 3rd sitting, PPPP lawmaker pointed the quorum but it was found complete upon counting while the 4th sitting had to be adjourned due to lack of quorum pointed out by a PTI lawmaker.

The House witnessed exchange of heated arguments during 5th sitting between Provincial Minister for Health and a PTI lawmaker over a cut motion. Due to their in-fight, the Chair had to suspend this particular sitting without transaction of entire agenda.

A resolution to bring members’ remuneration at par with Balochistan Assembly was adopted by the House which was sponsored by JUI-F lawmaker. The House witnessed two walkouts – one joint and other individual – and one protest by entire Opposition. The entire opposition protested for 104 minutes on floor of the House during Budget speech of the Finance Minister.