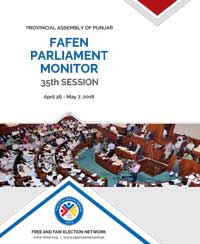 ISLAMABAD, May 10, 2018: Lack of interest of provincial lawmakers in proceedings marked the 35th session of Punjab Assembly, which passed one private member’s as well as two government bills and witnessed the introduction of nine legislative proposals.

The session, comprising seven sittings, started on April 26, 2018 and concluded on May 7, 2018. The cumulative duration of the sittings was 11 hours and 27 minutes as each sitting, on average, witnessed a delay of an hour and 46 minutes from its starting time and continued for an hour and 38 minutes.

The lack of quorum persisted during the first five sittings and it was pointed out for seven times. Four sittings had to be adjourned due to the presence of less than 25% (93) lawmakers in the House while the required number was found complete twice after the customary bells were rung for five minutes. One instance was such when the quorum was found complete after suspension of the proceedings for 40 minutes.

According to FAFEN’s observation, the lawmakers’ attendance remained low throughout the session – with an average of 21 (6%) members present at the start and 50 (13%) at the adjournment of each sitting.

All five resolutions appearing on the agenda were not taken up. These resolutions urged the government to construct a Cricket Ground in Lahore, ensure maintenance of roads affected during safe city project, take steps to control irregularities occurred during matric and intermediate exams, install CCTVs in Public places and take action to overcome the shortage of clean drinking water in Rawalpindi and Chaklala Cantonment board.

The Assembly’s Standing Committees presented 24 reports to the House during the session. These reports were mainly made on the legislative proposals, privilege motions and starred questions. The House granted the extension to various standing committees for the presentation of 12 reports while the government also presented eight reports on legislative proposals, three statutory reports and a report on the privilege motions before the House.