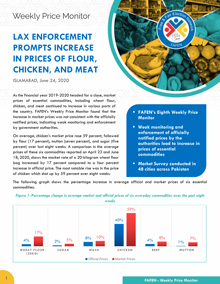 ISLAMABAD, June 24, 2020: As the financial year 2019-2020 headed for a close, market prices of essential commodities, including wheat flour, chicken, and meat continued to increase in various parts of the country. FAFEN’s Weekly Price Monitor found that the increase in market prices was not consistent with the officially notified prices, indicating weak monitoring and enforcement by government authorities.

On average, chicken’s market price rose 59 percent, followed by flour (17 percent), mutton (seven percent), and sugar (five percent) over last eight weeks. A comparison in the average prices of these six commodities reported on April 23 and June 18, 2020, shows the market rate of a 20-kilogram wheat flour bag increased by 17 percent compared to a four percent increase in official price. The most notable rise was in the price of chicken which shot up by 59 percent over eight weeks.

However, the change in the prices has been uneven across the districts. For instance, Karachi South reported an increase of 42 percent in sugar’s market price over past eight weeks, yet in Lahore, the sugar prices decreased by three percent while it remained stable in Peshawar. Similarly, wheat flour prices increased in most KP and Punjab districts, but registered a decrease in Dadu and Dera Bugti.

These findings form part of the eighth Weekly Price Monitor based on a market survey conducted on Thursday, June 18, 2020, in 48 cities—14 in Khyber Pakhtunkhwa, 13 in Punjab, 17 in Balochistan, and four in Sindh

During the last week, the official price of per kilogram sugar was not publicly accessible in nearly 56 percent of the surveyed markets—KP (100 percent markets), Balochistan (47 percent), Punjab (31 percent), and Sindh (25 percent).

Similarly, the official price of wheat flour was not displayed in around 52 percent of the markets, KP (100 percent), Punjab (38 percent), and Balochistan (35 percent).

The official prices of pulses—moong, masoor, mash, and chana—were inaccessible in 10 percent to 21 percent of the surveyed markets. At the same time, the prices of milk and yogurt were not publicly obtainable in 25 percent and 29 percent districts, respectively.

Moreover, mutton and beef prices were missing in 13 percent and 17 percent of the districts. The official price lists of regular vegetables—potatoes, onions, and tomatoes—were found inaccessible in 15 percent to 17 percent of the observed markets, mostly in Balochistan and KP.

Weak enforcement of official prices inconvenienced ordinary citizens as traders sold several commodities at higher rates than the officially notified prices. Daal mash was overpriced in 53 percent of the surveyed districts, masoor and chana in 41 percent areas, and moong in 35 percent regions. The pulses went Rs120 to Rs193 above the official price. Karachi South and Zhob emerged as the most expensive cities to shop for pulses.

Among the everyday vegetables, potatoes and onions were overpriced in 35 percent districts and tomatoes in 40 percent areas. The price of potatoes went Rs25 higher than the notified rate, followed by onions (Rs20), and tomatoes (Rs30). Washuk, Karachi, and Malakand were among the pricey districts for vegetable shopping.

In the meat category, beef and mutton (average quality with bone) were overpriced in 60 percent and 54 percent districts, and chicken in 29 percent areas. Mutton, beef, and chicken were priced at Rs929, Rs449, and Rs100, respectively, above the official rates. Karachi South remained the most expensive market for mutton and beef, and Panjgur for chicken on Thursday.

The market rates of eggs per dozen were above the officially notified prices in 19 percent districts. At the same time, the prices of milk and yogurt were higher than the official rates in 44 percent and 35 percent of the surveyed areas. Following graph shows the percentage of districts where official prices were not being followed.