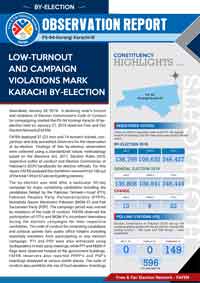 FAFEN deployed 37 (23 men and 14 women) trained, non-partisan and duly accredited observers for the observation of by-election. Findings of this by-election observation were collected using a standardized robust methodology based on the Elections Act, 2017, Election Rules 2018, respective codes of conduct and Election Commission of Pakistan’s (ECP) handbooks for election officials. For this report, FAFEN analyzed the checklists received from 100 out of the total 149 (or 67 percent) polling stations.

The by-election was held after a lackluster 30-day campaign by major contesting candidates including the candidates fielded by the Pakistan Tehreek-i-Insaf (PTI), Pakistan Peoples Party Parliamentarians (PPPP), Muttahida Qaumi Movement Pakistan (MQM-P) and Pak Sarzameen Party (PSP). The campaign period was marred by violations of the code of conduct. FAFEN observed the participation of PTI’s and MQM-P’s incumbent lawmakers during the election campaigns for their respective candidates. The code of conduct for contesting candidates and political parties bars public office holders including assembly members from participating in any election campaign. PTI and PSP were also witnessed using loudspeakers in their party meetings, while PTI and MQM-P flags were observed hoisted at the government buildings. FAFEN observers also reported PPPP’s and PSP’s hoardings displayed at various public places. The code of conduct also prohibits the use of loud speakers, hoardings and state resources for election campaigning.

In PS-94, ECP declared all polling stations as sensitive, and installed Close Circuit Television (CCTV) cameras. Comprehensive security arrangements were also made for the election with the deployment of Sindh Rangers inside and outside the polling stations, and a contingent of Pakistan Army on stand-by to handle any emergency situation. Moreover, ECP extended the magisterial powers to Sindh Rangers.
MQM-P’s Syed Hashim Raza won the by-election by securing 21,728 (53 percent of the polled votes), while PTI’s Muhammad Ashraf Jabbar secured 9,223 (22 percent) votes. According to the Provisional

Consolidated Statement of the Result of the Count (Form-47), a total of 323 (one percent) votes were excluded from the count. Earlier during the General Election (GE) 2018 , Muhammad Wajahat of MQM-P had won this constituency by securing 32,729 (35 percent) of the polled votes, while Tehreek-e-Labbaik Pakistan’s (TLP) Muhammad Shoib-Ur-Rehman was the runners up securing 14,030 (15%) votes. The seat had fallen vacant due to the death of Muhammad Wajahat.