Malaria and Dengue on the Rise 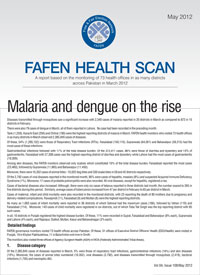 Diseases transmitted through mosquitoes saw a significant increase with 2,340 cases of malaria reported in 20 districts in March as compared to 872 in 15 districts in February. There were also 79 cases of dengue in March, all of them reported in Lahore. No case had been recorded in the preceding month. Tank (1,259), Karachi East (256) and Chitral (190) were the highest reporting districts of malaria in March.

FAFEN health monitors who visited 73 health offices in as many districts in March observed 2,385,845 cases of diseases. Of these, 54% (1,295,152) were those of Respiratory Tract Infections (RTIs). Faisalabad (150,110), Gujranwala (64,261) and Bahawalpur (59,215) had the most cases of these infections. Gastrointestinal infections followed with 17% of the total disease burden. Of the 372,411 cases, 86% were those of diarrhea and dysentery and 14% of gastroenteritis. Faisalabad with 27,308 cases was the highest reporting district of diarrhea and dysentery while Lahore had the most cases of gastroenteritis (19,309). Among skin diseases, the FAFEN monitors observed only scabies which constituted 10% of the total disease burden. Faisalabad reported the most cases (23,460), followed by Gujranwala (11,965) and Bahawalpur (11,450).

Moreover, there were 10,352 cases of animal bites – 10,022 dog bites and 330 snake bites in 59 and 42 districts respectively. Of the 2,792 cases of viral diseases reported in the monitored month, 90% were cases of hepatitis, measles (8%) and suspected Acquired Immune Deficiency Syndrome (1%). Moreover, 17 cases of probable poliomyelitis were also recorded. All viral diseases, except for hepatitis, registered a rise.

Cases of bacterial diseases also increased. Although, there were only six cases of tetanus reported in three districts last month, the number soared to 265 in five districts during this period. Similarly, average cases of tuberculosis increased from 47 per district in February to 65 per district in March. Cases of maternal, infant and child mortality were also recorded in the monitored districts, with 23 reporting the death of 80 mothers due to pregnancy and delivery-related complications. Rawalpindi (11), Faisalabad (9) and Multan (8) were the highest reporting districts. As many as 1,683 cases of infant mortality were reported in 36 districts of which Sahiwal had the maximum cases (166), followed by Vehari (119) and Faisalabad (114).

Moreover, 143 cases of child mortality were registered in six districts, out of which Toba Tek Singh was the top reporting district with 95 such cases. In all, 10 districts in Punjab registered the highest disease burden. Of these, 11% were recorded in Gujrat, Faisalabad and Bahawalpur (8% each), Gujranwala and Lahore (4% each), and Rajanpur, Sialkot, Multan, Kasur and Bahawalnagar (3% each).