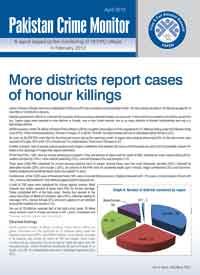 Cases of honour killings were more widespread in February 2012 as compared to the preceding month – 24 cases being reported in 16 districts as against 19 recorded in 12 districts in January. Despite government’s efforts to eradicate this practice, all four provinces reported at least one such case. It shows that more needs to be done to uproot this evil.

Twelve cases were reported in nine districts in Punjab, nine in four Sindh districts, two in as many districts of Khyber Pakhtunkhwa and one in a Balochistan district. FAFEN monitors visited 78 offices of District Police Officers (DPOs) to gather information on FIRs registered for 27 offences falling under the Pakistan Penal Code (PPC). Of the monitored districts, 28 were in Punjab, 21 in Sindh, 18 in KP, 10 in Balochistan and one in Islamabad Capital Territory (ICT). As many as 35,078 FIRs were filed for the observed crimes during the reporting month.

A region-wise breakup shows that 65% of the total crimes were reported in Punjab, 22% in KP, 12% in Sindh and 1% in Balochistan. There were 129 cases in ICT. A better outreach, lack of parallel judicial systems and a higher confidence level between the police and the people are said to be the probable reasons for better crime reportage in Punjab than regions elsewhere.

Of the total FIRs, 7,091 were for crimes pertaining to property. Forty one percent of these were for cases of theft, followed by motor vehicle lifting (24%), robbery and dacoity (18%), motor vehicle snatching (12%), criminal trespass (4%) and extortion (1%). There were 2,949 FIRs registered for crimes ensuing physical harm to people.

Among these, hurt was most frequently reported (42%), followed by attempted murder (25%) and murder ( 23%). Six percent of the FIRs were for accidental death (qatl-i-khata), illegal confinement (2%) and terrorismrelated incidents and accidental death (katal-bis-sabab/1% each). Furthermore, of the 2,329 cases of threat and fraud, 59% were of counterfeiting currency. Cheating followed with 17% cases, criminal breach of trust with 14%, criminal intimidation 6% and offences against public tranquility 4%.

A total of 793 cases were registered for crimes against women. Most frequent and widely reported of these were FIRs for forced marriage. These constituted 40% of the total cases. Twenty four percent of the cases were those of attack on modesty, rape (19%), offences relating to marriage (14%), honour killings (3%) and word, gesture or act intended to insult the modesty of a woman (1%). Ten out of 78 districts reported half of the total crime cases. Of these seven districts were in Punjab and three in KP. Lahore, Faisalabad and Peshawar were the highest reporting districts.