Most Schools in 85 Districts Without Playgrounds 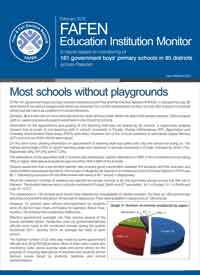 ISLAMABAD – Ninety-five boys’ primary schools out of 161 monitored across 85 districts in January 2012 were found to be without playgrounds, says a Free and Fair Election Network (FAFEN) report released on Thursday.

Similarly, 38 schools had no arrangements for clean drinking water for students while only eight had sanitary workers. Other support staff – peons and security guards – was there in only 48 and 55 schools, the report said.

A region-wise analysis showed all positions of non-teaching staff in schools monitored in Punjab, Khyber Pakhtunkhwa, Balochistan and FATA were filled. However, two of 12 such positions in Islamabad Capital Territory (ICT) and nine out of 63 in Sindh were vacant.

According to the report, the attendance of the appointed staff in schools was satisfactory, teacher attendance in 89% of the monitored schools being 76% or higher. Attendance of students was more than 76% in 86% of the schools.

The number of students per teacher in a monitored school of Khyber Agency in FATA was 62:1, followed by schools in KP and Balochistan with ratios of 45:1 and 42:1 respectively. However, the student-teacher ratio in schools monitored in Punjab, Sindh and ICT was better – 34:1 in Punjab, 31:1 in Sindh and only 13:1 in ICT.

The classrooms in 133 schools were found clean despite the unavailability of sanitary workers. As many as 129 schools had electricity connections and all but 16 had well-lit classrooms. Fans were available in classrooms of 128 schools.

However, 74 schools were without benches/chairs for students while 35 did not have chairs and tables for teachers. About three-fourths (118) schools had no teachers’ staffrooms.

There were 95 visits by government/elected officials made to the monitored schools during the quarter November 2011- January 2012, an average two visits to each school.

The highest number of 53 visits was made by some government officials and 39 by EDO/Education. Most of them were routine and monitoring visits; some surprise visits and some others for the purpose of checking attendance of teachers and students or to discuss issues faced by students, teachers and school administrations.

Two visits – a quarterly and a monitoring visit – were made by elected representatives to schools in Punjab. One general visit was made by an MPA to a school in KP.