MPs Interest in HR Issues Not Getting Matching Response from Govt 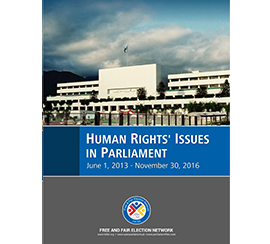 ISLAMABAD, December 10, 2016: Free and Fair Election Network (FAFEN) has browsed through the parliamentary data on human rights taken up by the legislators on floor of the Senate and the National Assembly during past three and a half years and found out mismatching response by the government over it, says a statement issued on the eve of International Human Rights Day on Saturday. The Parliament enacted laws for protection of children and women against sexual abuse and honor-killing but the Private Members’ proposals for welfare of minorities and disabled persons are stuck in the National Assembly due to treasury’s disinterest.

FAFEN, which is supported by the Trust for Democratic Education and Accountability (TDEA), has been observing the proceedings of the National Assembly and Senate since 2008 and 2011 respectively. The analysis of the reporting period revealed that the Members of the Parliament (MP) are much interested in taking up the issues of human rights in their respective legislatures. However, the government does seem much interested in enacting laws that may prevent human rights abuses in the country.

This report includes legislative and representative measures taken up by the parliamentarians on human rights abuses and their redressal mechanisms between June 1, 2013 and November 30, 2016. Its scope is limited to the regular parliamentary business that has been addressed during plenary sittings of 36 sessions of the 14th National Assembly and the sessions of the Senate held since April 2013.

The parliamentary business record reveals that the legislature has been trying to play its part in highlighting human rights violations in the country and ensuring fundamental rights of the citizens. The lawmakers regularly took cognizance of the human rights abuses, reminded the Executive of its obligations and held discussions to explore solutions for the hiccups.  They also responded to the human rights violations by introducing legislative solutions to curb the rights abuse. However, the proposals and discussions require Executive’s support to translate the bills into laws and policies. Despite several dozen legislative proposals, the Parliament could enact only one law during the reporting period which was related to child rights. However, the decision of the Parliament to allow military courts to try civilian terror suspects became controversial and drew ire of some lawmakers and human rights activists.

Besides legislation, the Parliament passed 53 Resolutions, held 19 discussions, asked 373 Questions and took up 15 Calling Attention Notices on the issue of human rights. Through resolutions, the Parliament condemned the incidents of violence and terrorism as well as urged the government to promote women’s empowerment and religious tolerance in the country. Throughout these parliamentary years, the lawmakers continued asking questions from the government on the issues related to human rights.