Murder and Crimes against Women Frequent in Urban Districts 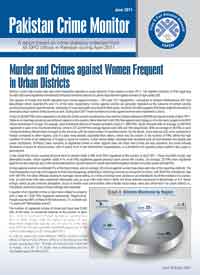 Serious crimes like murder and rape were frequently reported in urban districts of the country in April 2011. The highest numbers of FIRs regarding murder (98) were registered in the district of Karachi while the district of Lahore reported the highest number of rape cases (29). The regions of Punjab and Sindh reported more crimes against women – 79% and 12% respectively – compared to Khyber Pakhtunkhwa (KP) and Balochistan which reported 6% and 1% of the total, respectively.

Crimes against women are generally regarded as the outcome of certain socially sanctioned prejudices against women, especially in rural and largely inaccessible tribal areas. However the data suggests that these might be prevalent in developed urban centers of the country as well. During April 2011 most numbers of crimes against women were reported in Lahore.

A total of 29,505 FIRs were registered in 55 districts of the country monitored by Free and Fair Election Network (FAFEN) during the month of April 2011. Patterns of reportage varied across different regions in the country. More than half of all FIRs filed against each category of crime were lodged in the DPO offices monitored in Punjab. On average, each monitored district of Punjab recorded a total of 1,069 FIRs. Sindh followed with an average of 209 FIRs registered in each of its monitored districts, while in ICT and KP the average figures were 205 and 136 respectively.

With an average of 58 FIRs in each monitored district, Balochistan emerged as the province with the least number of reported crimes. On the whole, more districts (23) were monitored in Punjab compared to other regions, and it is also more densely populated than others, which may be a factor in the number of FIRs.

While the high numbers of crime of all categories in Punjab is cause for concern, it also shows better reportage and increased level of trust between the people and public institutions. Similarly, lower numbers of registered crimes in other regions does not imply that crimes are less prevalent, but could indicate reluctance of police to record crimes, lack of public trust in law enforcement organizations, or a preference for parallel justice systems like jirgas or panchayats. It was noted that crimes causing physical harm to people made a fifth of all FIRs registered in the country in April 2011. These included murder and attempted murder, which together made 47% of all FIRs registered against physical harm across the country.

The most frequently occurring crime against women was kidnapping, abducting or inducing a woman to compel her to marry, with 304 FIRs, followed by rape with 186 FIRs. For other offences relating to marriage, honor killing, or crimes involving word, gesture or act intended to insult the modesty of a woman, nine, six and three FIRs were registered nationwide, and no such FIRs were filed in either the three districts monitored in Balochistan or ICT. Honor killings, which as per common perception, occur in remote rural communities with a feudal social setup, were also observed in an urban district i.e., Faisalabad, where two cases of honor killings were reported. A quarter of all reported crimes in April were related to property with a total of 7,329 FIRs registered nationwide. Region-wise, Punjab reported 90% of these FIRs followed by 7% in Sindh and 1% each in KP, Balochistan and ICT.