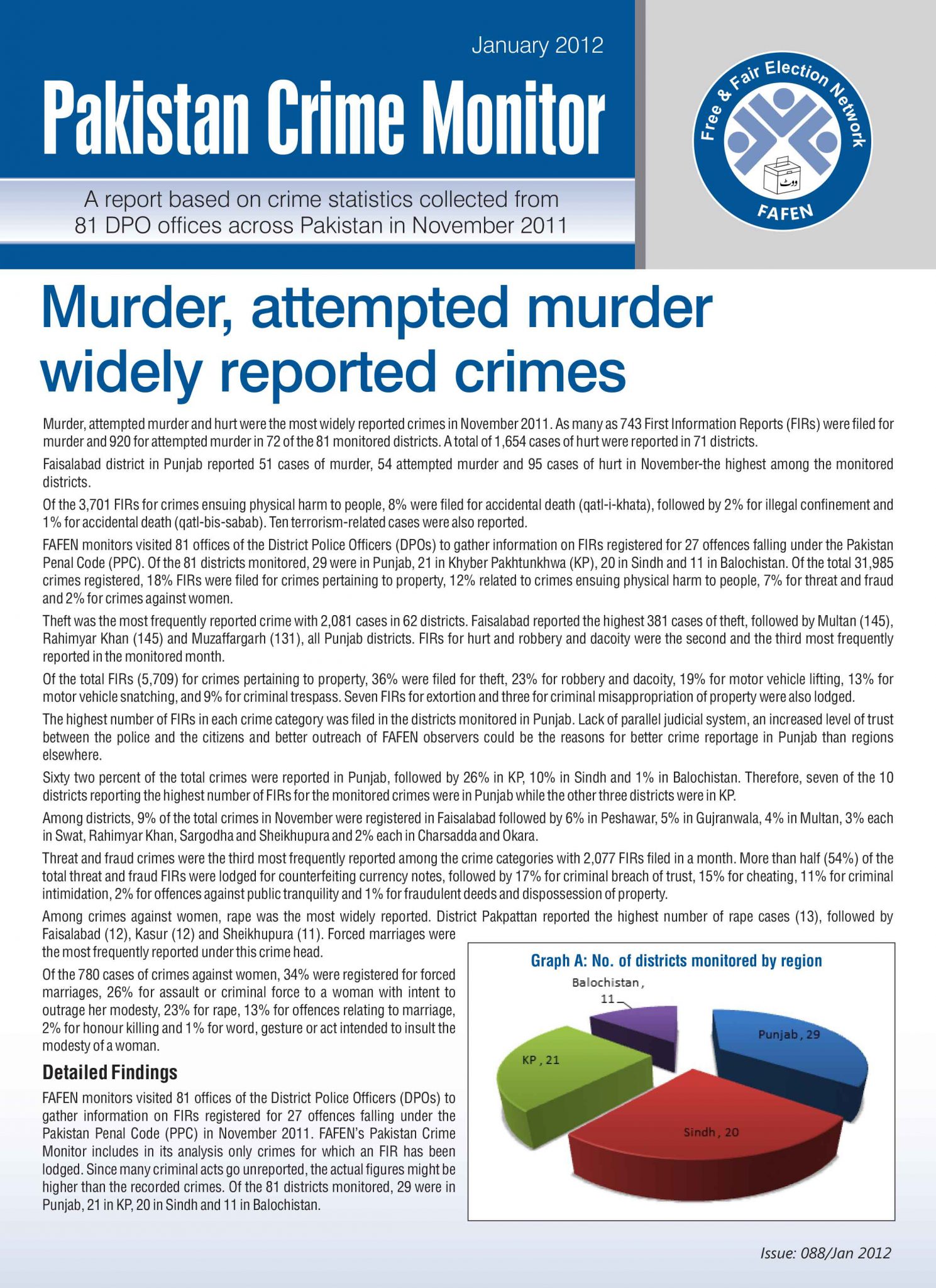 Of the 3,701 FIRs for crimes ensuing physical harm to people, 8% were filed for accidental death (qatl-i-khata), followed by 2% for illegal confinement and 1% for accidental death (qatl-bis-sabab). Ten terrorism-related cases were also reported. FAFEN monitors visited 81 offices of the District Police Officers (DPOs) to gather information on FIRs registered for 27 offences falling under the Pakistan Penal Code (PPC). Of the 81 districts monitored, 29 were in Punjab, 21 in Khyber Pakhtunkhwa (KP), 20 in Sindh and 11 in Balochistan. Of the total 31,985 crimes registered, 18% FIRs were filed for crimes pertaining to property, 12% related to crimes ensuing physical harm to people, 7% for threat and fraud and 2% for crimes against women.

Theft was the most frequently reported crime with 2,081 cases in 62 districts. Faisalabad reported the highest 381 cases of theft, followed by Multan (145), Rahimyar Khan (145) and Muzaffargarh (131), all Punjab districts. FIRs for hurt and robbery and dacoity were the second and the third most frequently reported in the monitored month. Of the total FIRs (5,709) for crimes pertaining to property, 36% were filed for theft, 23% for robbery and dacoity, 19% for motor vehicle lifting, 13% for motor vehicle snatching, and 9% for criminal trespass. Seven FIRs for extortion and three for criminal misappropriation of property were also lodged.

The highest number of FIRs in each crime category was filed in the districts monitored in Punjab. Lack of parallel judicial system, an increased level of trust between the police and the citizens and better outreach of FAFEN observers could be the reasons for better crime reportage in Punjab than regions elsewhere. Sixty two percent of the total crimes were reported in Punjab, followed by 26% in KP, 10% in Sindh and 1% in Balochistan. Therefore, seven of the 10 districts reporting the highest number of FIRs for the monitored crimes were in Punjab while the other three districts were in KP.

Among districts, 9% of the total crimes in November were registered in Faisalabad followed by 6% in Peshawar, 5% in Gujranwala, 4% in Multan, 3% each in Swat, Rahimyar Khan, Sargodha and Sheikhupura and 2% each in Charsadda and Okara. Threat and fraud crimes were the third most frequently reported among the crime categories with 2,077 FIRs filed in a month. More than half (54%) of the total threat and fraud FIRs were lodged for counterfeiting currency notes, followed by 17% for criminal breach of trust, 15% for cheating, 11% for criminal intimidation, 2% for offences against public tranquility and 1% for fraudulent deeds and dispossession of property.

Among crimes against women, rape was the most widely reported. District Pakpattan reported the highest number of rape cases (13), followed by Faisalabad (12), Kasur (12) and Sheikhupura (11). Forced marriages were the most frequently reported under this crime head. Of the 780 cases of crimes against women, 34% were registered for forced marriages, 26% for assault or criminal force to a woman with intent to outrage her modesty, 23% for rape, 13% for offences relating to marriage, 2% for honour killing and 1% for word, gesture or act intended to insult the modesty of a woman.