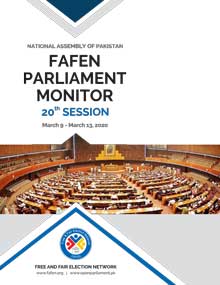 ISLAMABAD, March 13, 2020: The National Assembly passed bill for swift action on child abuse cases and left 65 percent of its scheduled business unaddressed during its 20th session that continued between March 9, 2020 and March 13, 2020, observes Free and Fair Election Network in its session report.

Of 342 lawmakers, 124 (36 percent) including 89 men and 35 women contributed to the proceedings of the House by sponsoring various parliamentary interventions and/or contributing in the debates. On the other hand, 218 (64 percent) lawmakers including 184 men and 34 women did not participate in the proceedings throughout the session.

The overall business including regular and supplementary agenda brought before the House during 10th session comprised 17 government and 20 private members’ bills, six resolutions, eight Calling Attention Notices (CANs), 22 reports of standing committees, 71 starred questions, six Motions under Rule 259, five amendments in Rules of Procedure and Conduct of Business in National Assembly 2007, two matters of public importance under Rule-87 and a discussion on the Motion of Thanks to the President for his annual address to the Parliament.