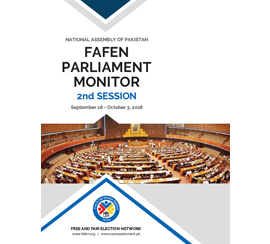 The Federal Minister for Finance, Revenue and Economic Affairs presented the Finance Supplementary (Amendment) Bill 2018 in the Lower House of Parliament during first sitting of the session on September 18, 2016. The House began discussion on the bill five days later on September 24, 2018 that continued till the last sitting on October 3, 2018.

As many as 66 lawmakers including 17 women, representing seven parliamentary parties and independents, participated in the discussion on the finance bill that continued for 17 hours and 17 minutes. The male lawmakers consumed nearly 81% (14 hours and 37 minutes) and female lawmakers 19% (three hours and 22 minutes) of this duration.

The ruling party PTI’s 19 lawmakers spoke on the budget for five hours and 35 minutes and were followed by 16 lawmakers of PML-N who were given five hours and 19 minutes to discuss the government’s financial proposals. Moreover, 15 legislators of PPPP got four hours and 10 minutes, seven of MMAP an hour and 17 minutes, four of BNP 51 minutes and three of MQM 38 minutes. An independent and BAP legislator also spoke on budget for six and three minutes, respectively.

The House also discussed the Senate’s recommendations on the finance bill. As many as three lawmakers – one each of PML-N, PPPP and MMAP – debated these recommendations for 57 minutes.

The House held nine sittings of cumulative duration 29 hours and 54 minutes during the session that continued from September 18,2018 till October 3, 2018. Almost four percent of the cumulative duration (an hour and 17 minutes) was lost in suspension of proceedings due to breaks. Each sitting started 33 minutes behind its scheduled time and continued for three hours and 19 minutes, on an average.

Every sitting had an average 123 (36%) lawmakers present at its commencement 112 (33%) lawmakers at the adjournment. The Leader of the House (Prime Minister) was present in three sittings and attended around 10% of the proceedings (two hours and 53 minutes) while the Leader of the Opposition attended eight sittings and nearly 51% of the proceedings (14 hours 43 minutes).

The parliamentary leaders of PML-N, BAP, MMAP and PML were observed present in every sitting while the leader of PPPP attended seven, BNP and AMLP five each, MQM four, GDA and JWP three each and ANP one sitting.