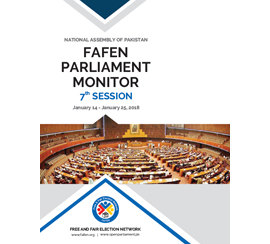 ISLAMABAD, January 29, 2019: The National Assembly did not address 61 percent of its agenda during seventh session that continued between January 14 to January 25, 2019. The House spent four hours and 29 minutes (19 percent) of the proceedings debating the killings of civilians in Sahiwal and three hours and 41 minutes (16 percent) on Points of Order discussing energy, agricultural, political and other issues  while the proceedings remained suspended for three hours and 14 minutes (14 percent) due to protests or lack of quorum.

The average attendance per sitting recorded a slight improvement since the Assembly’s last (sixth) session. On an average, 249 lawmakers were marked present during the seventh session as compared to 239 lawmakers during previous session.

A total of 133 out of 342 (or 39 percent) lawmakers including 29 men and 104 women participated in the proceedings of the House by contributing to the agenda and/ or to debates. The participating lawmakers included 45 members of PTI, 36 of PML-N, 28 of PPPP, eight of MMAP, four each of MQM and BNP, three Independents, two each of BAP, GDA and one of PML.

On the other hand, 209 (61 percent) lawmakers including 36 women did not participate in the proceedings throughout the session. The non-participating members included 110 of PTI, 49 of PML-N, PPPP (27), MMAP (eight), PML (four), MQM & BAP (three each) and one each of AMLP, ANP, GDA, JWP and an Independent lawmaker.

The session’s proceedings were repeatedly interrupted by the protests, walkouts or lack of quorum. The opposition lawmakers staged five walkouts and three protests over the issues relating to legislation, use of improper language and exclusion of questions from the agenda.  Moreover, they identified the quorum four times that led to the suspension of proceedings for 49 minutes and an early adjournment of a sitting.