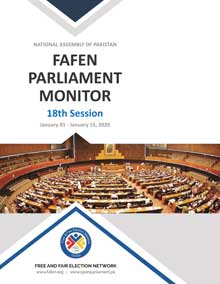 ISLAMABAD, January 16, 2020: The National Assembly addressed 46 percent of its scheduled business during its 18th session that continued between January 1 and January 15, 2020. FAFEN observed low participation of lawmakers as more than fifty percent (176 out of 342) lawmakers did not participate in the proceedings. The House passed 13 government bills including three legislative proposals to amend the procedures for appointment and extension of armed forces’ chiefs and the Chairman Joint Chiefs of Staff Committee, observes Free and Fair Election Network in its session report.

The regular and supplementary agenda brought before the House during 18th session comprised 96 private members’ bill and 18 government bills, 11 resolutions, 16 Calling Attention Notices (CANs), 32 standing committee reports and a statutory report, ten motions under Rule-259, a motion of thanks and two motions seeking amendments to the Rules of Procedure and Conduct of Business in National Assembly.

Of 342 lawmakers, 166 (49 percent) including 122 men and 44 women contributed to the proceedings of the House by sponsoring various parliamentary interventions and/or contributing in the debates. Among the participating lawmakers, 68 belonged to PTI, 41 to PML-N, 28 to PPPP, 14 to MMAP, six to MQMP, three to BAP and two each to BNP-M, PML and Independent.