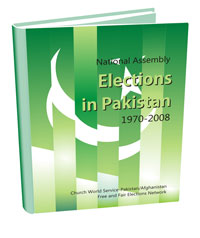 The failure of the military’s experiments with democracy led the country back to accept the golden principles of democracy. The ruling elite acknowledged that it can no longer deny the people the right to directly elect a government through adult franchise. General elections 1970 were the embodiment of this realization. The country had been derailed from this path more than once since then. The recent electoral history of the country is in fact a tug of war of between two major
forces one struggling to sustain the 1970’s gains and build further on those and the other trying to undo those and pull back the country to an autocratic rule. We thus had generals during the period using force to alter and engineer the electoral machinery to make it work the way that pleased them.

The book hand is concerned with the last of the four periods that witnessed nine general elections in the country.  To download this book, click here