Nearly 1.67 Million Ballots Excluded from the Count in General Election 2018 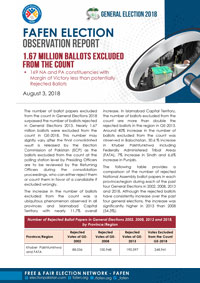 Erratum: An earlier version of this report had an error in the Annexure 1 Part b Section 2. The annexure has now been updated. However, the error had no implication on the overall analysis presented in the report.