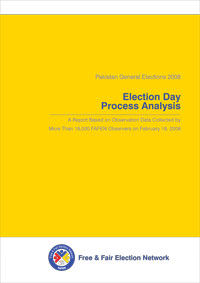 From June 13 to July 18, 2007, FAFEN conducted Pakistan’s first statistically valid audit of the Draft Electoral Roll (2007). FAFEN conducted a List-to-People and People-to-List audit in electoral areas covered by 506 randomly selected Display Centers throughout the country – a methodology that has been tried and tested in many other countries. These Display Centers were selected in 500 randomly chosen Union Councils according to proportion of population of each province. In addition, FAFEN observed the quality of processes implemented by the Election Commission of Pakistan (ECP) Display Center Information Officers (DCIOs) in order to analyze their fairness, neutrality, and transparency, based on the ECP’s Manual of Instruction.

FAFEN’s qualitative observation was conducted at about 21,000 (out of 45,000) Display Centers. Additionally, more than 3,000 DCIOs and 25,400 people visiting the Display Centers were interviewed to gauge their perceptions about the processes inside the centers. FAFEN also studied the activities of political parties and civil society organizations during the Display Period to analyze their level of interest in the process at more than 5,500 locations of the four provinces. A total of 754 FAFEN static and mobile observers, duly trained for their multi-faceted tasks, were employed to carry out this research.

FAFEN designed a long-term pre-election observation strategy involving one Observer District Coordinator (ODC) in each district, complemented by additional Constituency Coordinators (CCs) in districts with more than one National Assembly constituency. In total, FAFEN member CSOs hired 264 ODCs and CCs, covering all but eight constituencies in eight FATA Agencies. Each FAFEN ODC functioned as a CC for the National Assembly (NA) constituency in their district and had overall management responsibility for their district, including supervision of any additional CCs and all Election Day observers.

FAFEN provided four rounds of training for ODCs and CCs. Training sessions took place in nine locations across Pakistan. Observer District Coordinators were trained in September 2007 (in five clusters), November 2007 (in 11 clusters), in December 2007 (in 13 clusters) and in January 2008 (in 12 clusters), for a total of 41 training sessions in nine cities. ODCs and CCs submitted comprehensive, standardized checklists each week to the FAFEN Secretariat/Data Center covering a wide range of election preparation and campaign issues. FAFEN’s aim was to design these checklists so that they would capture quantifiable information – rather than only anecdotes – that could be tabulated weekly.

Approximately 120 ODCs and 140 additional CCs sent weekly reports to FAFEN during a 15-week period to the FAFEN Secretariat based in Islamabad, which used this information to raise pertinent issues with various stakeholders with a view to improving the quality of electoral processes. In early November, FAFEN began publishing 19 “FAFEN Election Updates” based on the reports by ODCs and CCs around the country. In addition to these data-driven Updates, FAFEN published “Missing and Duplicate Voters on Final Electoral Roll (FER),” February 13, 2008, providing conclusions of a FAFEN follow-up audit of the combined 2007 FER and the 2002 Supplemental Electoral Roll. This secondary audit was based on data from FAFEN’s 2007 statistical “people-tolist” and “list-to-people” field audit of the Draft Electoral Roll as well as subsequent analysis for submission of an amicus brief to the Supreme Court on the same topic and continuous monitoring and advocacy about the development of the 2008 Final Electoral Roll.