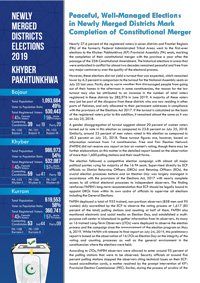 ISLAMABAD, July 21, 2019: Nearly 27.6 percent of the registered voters in seven districts and Frontier Regions (FRs) of the formerly Federally Administered Tribal Areas went to the first-ever elections to the Khyber Pakhtunkhwa (KP) Provincial Assembly (PA) seats, marking the completion of their constitutional merger with the province a year after the passage of the 25th Constitutional Amendment. The historical elections in areas that were embroiled in conflict for almost two decades remained peaceful and free from any major controversy over the quality of the electoral process.

However, these elections did not yield a turnout that was expected, which remained lower by 6.3 percent in comparison to the turnout for the National Assembly seats on July 25 last year. Partly due to warm weather that discouraged people from going out of their homes in the afternoon in some constituencies, the reason for the low turnout may also be attributed to an increase in the number of total voters registered in these districts by 285,976 in June 2019. A majority of these voters may just be part of the diaspora from these districts who are now residing in other parts of Pakistan, and only allocated to their permanent addresses in compliance with the provisions of the Elections Act 2017. If the turnout is calculated on the basis of the registered voters prior to this addition, it remained almost the same as it was on July 25, 2018.

The election followed a competitive election campaign with almost all major political parties vying for majority of the 16 PA seats. Supervised directly by ECP officials as District Returning Officers (DROs) and Returning Officers (ROs), the crucial election processes before and on Election Day was largely managed in accordance with the provisions of the Elections Act, 2017 with nearly complete access to all critical electoral processes to independent observers. The finding reinforces FAFEN’s long-term recommendation that ECP should be legally bound to appoint DROs from within its own cadre of officials to supervise all elections including the General Elections.

FAFEN deployed a total of 953 trained, non-partisan observers (858 men and 95 women) duly accredited by the ECP to observe the voting process at 1,617 (85 percent of the total) polling stations and counting at half of them. FAFEN also monitored electronic and social media on Election Day, and established a multi-purpose call center in Islamabad to gather information from its observers. As many as 16 trained Long-Term Observers (LTOs) were deployed to observe the election process and the campaign since the announcement of the election program on May 6, 2019. While FAFEN will release its final report on July 24, 2019, this preliminary report is based on the observation of 16 LTOs on Election Day on the integrity of the voting and counting processes as well as the general environment in the constituencies where the elections were held.

According to LTOs, FAFEN observers were allowed to enter around 95 percent of the polling stations that were to be observed. Security officials at around five percent polling stations stopped the observers citing technical issues on their ECP-issued accreditation cards, a matter resolved by the prompt intervention of KP’s Provincial Election Commissioner (PEC). Earlier, during the process of scrutiny of the nomination papers at ROs’ offices, FAFEN observed the process of scrutiny of 275 candidates in 12 constituencies. Security officials did not entirely allow observation of the nomination process in four constituencies – PK-103 (Mohmand-I), PK-104 (Mohmand-II), PK-114 (South Waziristan II) and PK-115 (Ex-Frontier Regions).

Amid apparently misplaced security fears, the overall environment on Election Day remained peaceful with FAFEN observers reporting three incidents of violence in Khyber, Mohmand and Kurram leading to interruptions to the voting process. In PK-105 Khyber-I and PK-109 Kurram-I, FAFEN observers reported clashes between workers of rival candidates. Two persons were reportedly injured due to an incident of firing outside a polling station in PK-103 Mohmand-I. A media outlet also reported an incident of firing on an independent candidate in South Waziristan. However, FAFEN could not confirm the report through its observers.

The conduct of the polling staff and security officials was observed to generally have remained in line with the provisions of the law and their respective codes. However, FAFEN observers reported interruptions in the voting process at some polling stations due to inadequately trained staff and shortage of election materials. In addition, FAFEN LTOs also reported certain irregularities of electoral law, rules and codes from multiple constituencies such as canvassing and campaigning outside polling stations, oversized polling stations, provision of transportation to voters by candidates, etc. In one instance, a party candidate was observed to have been distributing money among potential voters. The scale of these irregularities, will, however, be accurately determined in the detailed report. FAFEN LTOs also reported instances of voters not knowing their polling stations due to low cellular density in the area, and hence limited access to ECP’s 8300 service.

ECP oversaw the management of this election by deploying 13,223 trained personnel to perform election duties in 16 PAs at 1,896 polling stations with 5,651 polling booths. In order to preempt any untoward incident on Election Day, the ECP exercising its powers under Articles 220 and 245 of the Constitution had positioned a three-tier security system deploying over 34,000 personnel of armed forces alongside police and other law enforcement agencies inside and outside polling stations.

Notwithstanding concerns raised by some major political parties including Pakistan Peoples’ Party – Parliamentarians (PPPP) and Awami National Party (ANP) over the fairness of the electoral process before election as well as the deployment of security forces inside stations, ECP appeared to have asserted its authority by timely redressing complaints by political parties and contesting candidates for changing ROs and AROs in four constituencies, and also issuing orders to the Provincial Administration for the release of two detained candidates contesting elections from PK-113 South Waziristan-I and PK-114 South Waziristan-II as independents. Moreover, the KP’s PEC instructed the DRO Kurram to take notice of a provincial minister’s announcement of constructing sports grounds in the district. The Commission had also directed the Provincial Government to install CCTVs at all polling booths, and withhold any development schemes including the Insaf Rozgar in erstwhile FATA till elections are held.

As many as 297 candidates including two women contested the elections on general seats, of which nearly three-quarter (213 or 72 percent) were independents and the remaining 84 (28 percent) belonged to 10 political parties. The ECP had set-up 1,896 polling stations for 2,798,277 registered voters, averaging one polling station for 1,476 voters. A total of 44 polling stations were set up in Hangu and Kohat for the Internally Displaced Voters (IDPs) from PK-110 (Orakzai), and 14 in Bannu for IDPs from PK-112 (North Waziristan-II).

FAFEN acknowledges the Newly Merged Districts’ (NMDs) polls as a step forward towards consolidation of democracy in Pakistan, and congratulates all stakeholders including ECP, political parties, media, civil society organizations, security agencies and citizens for playing their constitutional and legal roles in ensuring peaceful conduct of these elections.