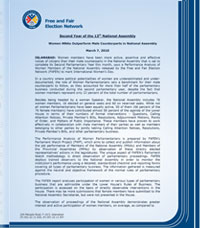 ISLAMABAD: Women members have been more active, assertive and effective voices of citizens than their male counterparts in the National Assembly that is set to complete its Second Parliamentary Year this month, says a Performance Analysis of Women Members of the National Assembly released by the Free and Fair Election Network (FAFEN) to mark International Women’s Day.

In a country where political potentialities of women are underestimated and underdocumented, the role of Women Parliamentarians sets a benchmark for their male counterparts to follow, as they accounted for more than half of the parliamentary business conducted during the second parliamentary year, despite the fact that women members represent only 22 percent of the total number of parliamentarians.

Besides being headed by a woman Speaker, the National Assembly includes 76 women members, 16 elected on general seats and 60 on reserved seats. While not all women Parliamentarians have been equally active, 50 of them (66 percent of the 76 female members) have contributed almost 50 percent of the agenda of the Lower House in terms of their numbers of formal interventions – Questions, Calling Attention Notices, Private Member’s Bills, Resolutions, Adjournment Motions, Points of Order, and Matters of Public Importance.

These members have proven to work effectively in collaboration with male members of their parties as well as members belonging to other parties by jointly tabling Calling Attention Notices, Resolutions, Private Member’s Bills, and other parliamentary business. The Performance Analysis of Women Parliamentarians is prepared by FAFEN’s Parliament Watch Project (PWP), which aims to collect and publish information about the job performance of Members of the National Assembly (MNAs) and Members of the Provincial Assemblies (MPAs) by observation of these directly elected representatives’ actions in the legislatures.

The unique aspect of FAFEN’s Parliament Watch methodology is direct observation of parliamentary proceedings. FAFEN deploys trained observers to the National Assembly in order to monitor the institution’s performance using a detailed, standardized checklist and reporting forms covering all types of parliamentary business. The information gathered is measured against the neutral and objective framework of the normal rules of parliamentary procedure.