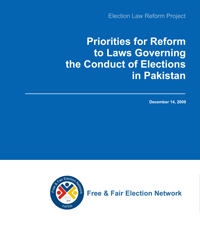 Under the chairmanship of Mr. S.A. Iqbal Qadri, the National Assembly’s Standing Committee on Parliamentary Affairs has requested public input on how Pakistan’s current election law might be reformed. While FAFEN and other election-related institutions argue that wholesale election law reform is required— change that would lead to a legal framework that reflects best practices in election administration and is consistent with international standards—FAFEN has prioritized within this discussion paper the reforms that could have a timely and tangible impact within the law as it currently stands.

This discussion paper offers two overarching reform areas within which a number of reform “themes” are offered. In the first section, the paper outlines specific priorities for strengthening the current institutional arrangement for three electoral stakeholders in Pakistan — the Election Commission, political parties, and election observers, arguing three themes for change within election law, including:

In the second section, the paper offers specific priorities for improving the country’s electoral processes in the context of polling stations, the electoral rolls, and election results, with four themes for change being considered, including:

The final section may be of greatest benefit to legislators as they consider how the reforms proposed in the first two sections might tangibly be instituted within the law. The paper offers cross-referenced tables that provide proposed amendments to the election law in its current form.