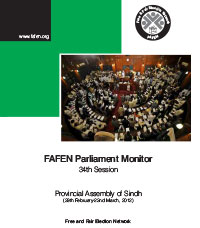 The Sindh Assembly passed five Government Bills during the 34th session, held from 29th February to 22nd March 2012. The session comprised 14 daily sittings and lasted 28 hours and 45 minutes. On average, each of these sittings lasted for an hour and 36 minutes, and started late by 85 minutes.

The five Bills – three new legislations and two amendments to exiting laws – pertained to regularization of teachers based on performance, the powers of the Governor to increase tenures of current Ombudsmen, establishment of a medical institution at Sehwan, irrigation issues and awarding university status to the Indus Institute of Higher Education (IIHE).