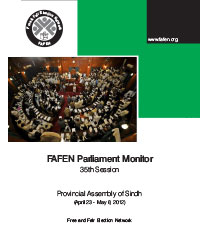 Low attendance of Members, late starts, Points of Order interrupting regular proceedings and a brief discussion on law and order marked the Sindh Assembly’s 35th session. Following the Supreme Court verdict in the contempt case, the House adopted a Resolution reposing confidence in the Prime Minister.

A Resolution on the Bhoja Air plane crash, which resulted in loss of 127 lives, was also adopted. In all the Assembly adopted six Resolutions. The session spanning 23 hours and 10 minutes comprised nine sittings between April 23 and May 8, on average meeting two hours and 34 minutes per sitting. Each sitting on average was delayed by 102 minutes.