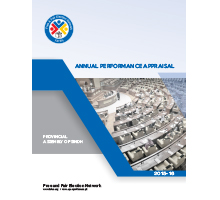 The third parliamentary year of the 14th Sindh Assembly was characterized by active treasury-backed legislation as 28 government bills were passed and 36 resolutions – mainly dealing with governance, education and health issues – were adopted.

The House assembled in five sessions starting on June 13, 2015 and ending on May 3, 2016. These sessions lasted 182 hours and 7 minutes – fulfilling the constitutional requirement (under Article 54) to be in session for a hundred days in a year.

The Chief Minister and the Leader of the Opposition demonstrated low attendance as the former was present in 30 sittings (25% of the proceedings’ time) while the latter in 43 (50% of total time). Low interest in parliamentary business shown by the key members was also reflected in members’ attendance which averaged around 50%. An average of thirty-six MPAs (21%) were seen to be present at the beginning of the sitting, while 57 (34%) were seen at the time of adjournment. However, the attendance record of parliamentary leaders was more encouraging as the PPPP leader attended 54 sittings followed by leaders of MQM (52), PTI (49), PML-F (48) and PML-N (44).

FAFEN classifies members’ participation in three categories – members only submitted agenda on the List of Business, members only taking part in the on-floor debates, and members doing both.

Lawmakers from all parties participated in proportion to their strength in the House. Out of 161 lawmakers in the House at present, 140 (89%) participated in one of the three manners while 18 (11%) remained inactive, failing to submit any agenda item or take part in debate.

All 30 female MPAs took part in the proceedings by submitting agenda as well as participating in the debates or doing both. Meanwhile, 86% male lawmakers (113 out of 131) did the same. The participation of non-Muslim lawmakers also remained significant as eight out of 9 lawmakers contributed to the assembly proceeding.

During the third parliamentary year, 67 resolutions appeared on the Orders of the Day; 36 of these were adopted by the House, 28 were not taken up, two were deferred and one was referred to the relevant committee.

The Sindh Assembly is required, by Rules 143 and 144, to hold a pre-budget discussion between January and March to submit proposals on the upcoming budget to the federal government and to hold quarterly post-budget discussions to review the release and utilization of the existing budget. However, during the third parliamentary year, this discussion was delayed and held in last week of April. A total of 20 lawmakers participated in this debate that lasted four hours and six minutes, and discussed budget expenditure, utilization and pre-budget proposals for the annual budget 2016-17.

The post-budget debate continued for six days and the lawmakers debated the Budget (2015-16) for 24 hours and 43 minutes (63% of the session time). Overall, the session (June 13 – June 25) was marked by low interest of lawmakers as more than half of the legislators did not contribute to the debate.

Of the 79 members who took part in the budget debate, 24 were female and 55 male. Yet the female lawmakers were proportionally more active as compared to their male counterparts, as 80% (24 out of 30) of the women lawmakers expressed their views on the budgetary proposals while only 40% (55 out of 137) male MPs contributed to the general discussion.

The female lawmakers consumed five hours and five minutes while their male counterparts expended 19 hours and 38 minutes of the debate.

As many as 24 questions of personal privileges were moved by 19 lawmakers during the year. Of these privilege motions, 12 were not taken up, six were withdrawn, three were referred to committee, two got rejected and one was disposed of.

Eight MQM lawmakers proposed 24 amendments in the Rules of Procedure of the Provincial Assembly of Sindh, 2013 but the House did not take up any of these amendments.

The Sindh assembly witnessed fifty incidents of protests and walkouts by opposition parties during its 3rd Parliamentary Year that consumed 516 minutes (eight hours and 36 minutes) of the proceeding sharing five percent of total sessions’ time.

Lawmakers belonging to MQM were involved in highest number of protests (13) and walkouts (5) individually consuming 126 minutes of the proceeding followed by two protests each by PML-F and PPPP legislators consuming seven minute and two minutes respectively. The PTI lawmakers staged one walkout separately for fifteen minutes while MPs belonging to PML-N and NPP remained apart from staging any protest or walkout individually. The remaining 18 protests and nine walkouts were demonstrated by more than one opposition parties.

The Speaker was notified of the missing quorum – less than 42 members – on three occasions. On two of these occasions, the Speaker did not take any action while the quorum was found to be complete upon recounting at one occasion. There was an instance when Speaker ordered the bells to be rung for 10 minutes due to sparse attendance in the House. The proceeding started after completion of quorum.