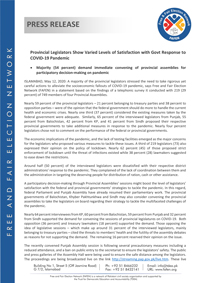 ISLAMABAD, May 12, 2020: A majority of the provincial legislators stressed the need to take rigorous yet careful actions to alleviate the socioeconomic fallouts of COVID-19 pandemic, says Free and Fair Election Network (FAFEN) in a statement based on the findings of a telephonic survey conducted with 219 (29 percent) of 749 members of four Provincial Assemblies.

The economic implications of the pandemic and the lack of testing facilities emerged as the major concerns for the legislators who proposed various measures to tackle these issues. A third of 219 legislators (73) also expressed their opinion on the policy of lockdown. Nearly 62 percent (45) of those proposed strict enforcement of lockdown until the threat of infections existed while 38 percent (28) lawmakers suggested to ease down the restrictions.

Around half (50 percent) of the interviewed legislators were dissatisfied with their respective district administrations’ response to the pandemic. They complained of the lack of coordination between them and the administration in targeting the deserving people for distribution of ration, cash or other assistance.

A participatory decision-making through Provincial Assemblies’ sessions might boost the level of legislators’ satisfaction with the federal and provincial governments’ strategies to tackle the pandemic. In this regard, federal Parliament and Punjab Assembly have already resumed their parliamentary work. The provincial governments of Balochistan, Khyber Pakhtunkhwa, and Sindh may also consider convening the provincial assemblies to take the legislators on board regarding their strategy to tackle the multifaceted challenges of the pandemic.

Nearly 64 percent interviewees from KP, 60 percent from Balochistan, 59 percent from Punjab and 32 percent from Sindh supported the demand for convening the sessions of provincial legislatures on COVID-19.  Both opposition (36 percent) and treasury lawmakers (18 percent) supported the demand. Those opposing the idea of legislative sessions – which make up around 31 percent of the interviewed legislators, mainly belonging to treasury parties – cited the threats to members’ health and the futility of the assembly debates as reasons for not supporting the demand.  The remaining 16 percent reserved their opinion on the issue.

The recently convened Punjab Assembly session is following several precautionary measures including reduced attendance, and a ban on public entry to the secretariat to ensure the legislators’ safety. The public and press galleries of the Assembly Hall were being used to ensure the safe distance among the legislators. The proceedings are being broadcasted live on the link http://streaming.pap.gov.pk/live.htm. These live broadcasts, however, are not widely accessible due to technical limitations. TDEA-FAFEN suggests the legislatures to liberally use the social media and online options – Facebook Live, YouTube etc. – to make the House proceedings and decisions accessible to the press, independent observers, and public.

The provincial assemblies of KP, Sindh, and Punjab were in session during March when the COVID-19 cases started spreading in Pakistan, forcing the prorogation of the sessions. Since then, there has been an embargo on the plenary and committee meetings of the assemblies. It is pertinent to note that delay in convening the sessions might also lead the provincial assemblies to run the risk of not meeting the constitutional requirement of 100 working days in a parliamentary year. With just three months left of the second parliamentary year, Balochistan Assembly is yet to complete 56 working days, Punjab Assembly 50 working days, KP Assembly 48 working days and Sindh Assembly 23 working days.

The interviews with 219 members of provincial assemblies were conducted between April 17 and April 24, 2020. The interviewees included 101 (27 percent) members of Punjab Assembly, 53 (32 percent) of Sindh Assembly, 45 (31 percent) of Khyber Pakhtunkhwa Assembly, and 20 (31 percent) of Balochistan Assembly. The legislators belonging to 15 parliamentary parties were contacted for the survey. The treasury and opposition parties had almost equal representation among the pool of respondents – 51 percent and 49 percent, respectively. The interviewees included around a quarter of (27 percent) women legislators.