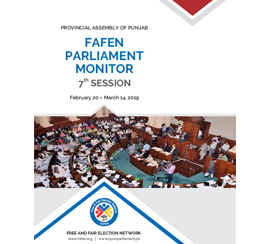 Islamabad, March 19, 2019:The Punjab Assembly addressed 70 percent of the agenda during seventh session that continued between February 20 and March 14, 2019. The House spent five hours and 31 minutes (18 percent) on Points of Orders (POs) while the Leader of the House remained absent throughout the session.

Among other legislative business, the House passed the Punjab Public Representatives Laws (Amendment) Bill, 2019 which proposed to enhance the salaries and other privileges of Members Provincial Assembly, Speaker, Deputy Speaker and the Chief Minister.

The 17-sitting session’s agenda comprised nine bills, 25 resolutions, 14 Calling Attention Notices (CANs), 26 Adjournment Motions (AMs), seven reports and as many Zero Hours notices and an amendment to the Rules of Procedure and Conduct of Business in Provincial Assembly.

The House passed entire legislative business including eight government and one Private Members’ bill, adopted six resolution appearing on agenda along with seven supplementary resolutions and an amendment to the rules of procedure while four standing committee reports and three motions seeking extension in presentation time of reports were also presented before the House during the session. Moreover, the government responded to 11 AMs, ten CAN, five Zero Hour notices and 87 Starred Questions. Of 370 lawmakers, around 64 percent (236) did not participate in the proceedings of the House while as many as 134 lawmakers or 36 percent of the total membership including 40 women and 94 men participated in the proceedings by contributing to the agenda and/or participating in debates during the reporting period.

As many as 68 members of PML-N, 57 of PTI, four each of PPPP and PML and one of PRHP actively participated in the proceedings while among the non-participating members 125 belonged to PTI, followed by 97 from PML-N, six from PML, three from PPPP and five Independent lawmakers.

The seven instances of identification of quorum were witnessed during the session which led to the adjournment of three sittings and suspension of the proceedings twice while quorum was found complete on two occasions.

The session witnessed five walkouts and as many protests over the political matters including passage of a legislative proposal, Chair’s attitude, objectionable remarks of lawmakers from both sides of aisles and a Minister’s statement against Hindu Community.

The House held general discussion on multiple topics including annual reports of development authorities and Public Service Commission, budget matters and commemoration of International Women’s Day. As many as 39 lawmakers participated in discussion for four hours and 35 minutes (15% of the proceedings).