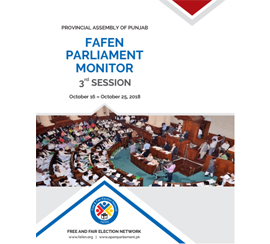 ISLAMABAD, December 17, 2018: The Punjab Assembly addressed nearly three quarters (72%) of its scheduled business during its fifth session that continued between December 3 and December 14, 2018. The session, comprising ten sittings, continued for 23 hours and 14 minutes with each sitting, on an average, starting an hour and 28 minutes behind the scheduled time and lasting for two hours and 20 minutes.

According to FAFEN’s headcount conducted during the proceedings, an average of 79 (21%) members present at the start and 71(19%) at the adjournment of each sitting. On the other hand, the official attendance statistics show that an average of 221 members attended every sitting. The highest official attendance was 235 and the lowest 190. Similarly, six out of eight minority lawmakers attended each sitting on an average. The Chief
Minister did not attend any sitting throughout the session while the Leader of the Opposition attended only one out of ten sittings for 25 minutes.