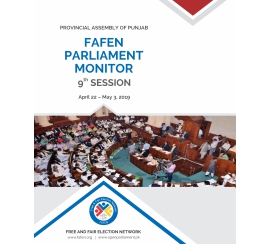 ISLAMABAD, May 03, 2019: Nearly 78% of the legislators did not participate in the proceedings of the Provincial Assembly of the Punjab during ninth session that continued between April 22 and May 03, 2019.

As many as 81 lawmakers or 22 percent of the total 369 including 23 women and 58 men participated in the proceedings of the House by contributing to the agenda and/or participating in debates. The participating lawmakers included 46 of PML-N, 25 of PTI, five of PPPP, four of PML and one of PRHP.

The remaining 288 (78 percent) lawmakers including 50 women did not participate in the proceedings throughout the session. The non-participating members included 158 members belonging to PTI, followed by PML-N (118), PML (six), four independent lawmakers and PPPP (two).