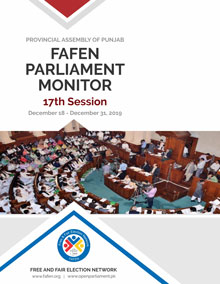 ISLAMABAD, December 31, 2019: The Provincial Assembly of Punjab transacted two-fifth of its scheduled business during the 17th session that continued between December 18, 2019, and December 31, 2019, observes Free and Fair Election Network (FAFEN) in its session report.

Each sitting, on an average, commenced an hour and 19 minutes behind the scheduled time and lasted an hour and 54 minutes. An average of 39 (10%) lawmakers were present at the outset and 59 (16%) lawmakers at the adjournment of each sitting. The Leader of the House (Chief Minister) did not attend any of the sitting while the Leader of the Opposition was present in two sittings for 57 minutes.