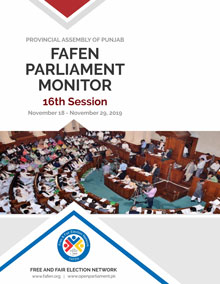 The overall agenda during the session included 24 bills, 22 resolutions, 31 reports of Standing Committees, 14 adjournment motions (AMs), eight Call Attention Notices (CANs), two zero hour notices, one question of privilege and debate on a matter of public importance. The Provincial Assembly addressed 88 percent of the entire agenda but its oversight role of the executive remained unimpressive as it only managed to take up 25 percent of the Starred Questions during Question Hours.