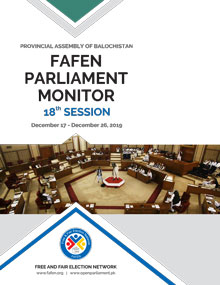 ISLAMABAD, January 30, 2020:: The Provincial Assembly of Punjab left 72% of its scheduled business unaddressed during 18th session, comprising five sittings that continued between January 23, 2020 and January 29, 2020, observes Free and Fair Election Network (FAFEN) in its session report.

Each sitting, on an average, commenced an hour and 40 minutes behind the scheduled time and lasted two hours and 32 minutes. An average of 40 (10%) lawmakers were present at the outset and 58 (16%) lawmakers at the adjournment of each sitting. The Leader of the House (Chief Minister) did not attend any of the sitting while the Leader of the Opposition was present in one sitting for 54 minutes.

The regular as well as supplementary agenda of the House during 18th session comprised nine resolutions, four adjournment motions, two reports and as many Call Attention Notices, one private member’s bill, one zero hour notice and one question of privilege. The House overall transacted 28% agenda while lawmakers spoke on 56 Points of Order (POs) during the session, consuming 14 percent (an hour and 50 minutes) of the proceedings.