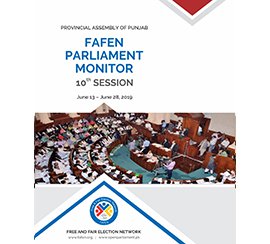 The Provincial Assembly of Punjab addressed 88 percent of its scheduled agenda during 10th session and also passed the provincial budget for financial year 2019-20, observes Free and Fair Election Networks (FAFEN) in its session report.

The House passed the Punjab Finance Bill, 2019 and approved 41 Demands for Grants pertaining to various public departments while it rejected seven cut motions of opposition lawmakers with majority votes.

Of 369 lawmakers, 121 (33 percent) contributed to the budget debate. Among them, 41 were female legislators while 80 were male lawmakers. The interest of women legislators in budget was higher than men lawmakers in context of their total membership in the House.