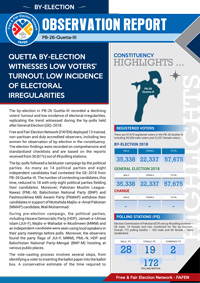 ISLAMABAD, January 1, 2019: The by-election in PB-26 Quetta-III recorded a declining voters’ turnout and low incidence of electoral irregularities, replicating the trend witnessed during the by-polls held after General Election (GE)-2018.

Free and Fair Election Network (FAFEN) deployed 13 trained, non-partisan and duly accredited observers, including two women for observation of by-election in the constituency. The election findings were recorded on comprehensive and standardized checklists and are based on the reports received from 30 (61%) out of 49 polling stations.

The vote-casting process involves several steps, from identifying a voter to inserting the ballot paper into the ballot box. A conservative estimate of the time required to complete all these processes suggests that polling staff at one polling booth can accommodate a maximum of 45 voters in an hour. An hourly turnout of more than 45 voters at a polling booth is, therefore, considered to be statistically improbable. FAFEN observation recorded the statistically improbable voting patterns at six (11%) out of 53 polling booths.

ECP had made strict security arrangements for the polls with Frontier Constabulary (FC) and police performing their duties at the polling stations while Pakistan Army was on alert to respond to any untoward incident in the constituency.

HDP candidate Qadir Ali won the by-election by securing 5,351 (34%) of the polled votes while MMAP candidate Wali Muhammad remained runner-up with 4,409 (28%) votes. According to the Provisional Consolidated Statement of the Result of the Count (Form-47), 341 (2%) votes were excluded from the count.