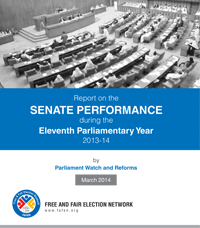 The Senate ended its eleventh parliamentary year 2013-14 on 11th March, 2014. The Senate annual year 2013-2014 bore testimony to some crucial political developments in the country. The caretaker set up was in place in early 2013 to oversee the general elections. The elections led to first ever transition from a democratically elected government to another with the continuity of the Senate in perpetuating democracy. A distinguishing feature of the National Assembly Senate relationship after the General Elections 2013 is the dominance of opposition parties in the Senate. The Senate is in position to act as counterbalance on legislative developments.