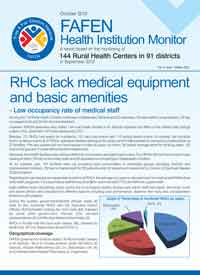 ISLAMABAD, November 13, 2012: Among the 144 Rural Health Centers monitored in September, 88 lacked ECG machines, 54 were without x-ray facilities, 33 had no oxygen tents and 24 did not have sterilizers, says a Free and Fair Election Network (FAFEN) report.

The report released on Tuesday said FAFEN observers visited the health centers in 91 districts. They reported that four-fifths of these had syringe cutters (132 RHCs), stretchers (127) and delivery kits (127).

Besides, 131 RHCs had wards for inpatients; 121 had x-ray rooms with 115 having dental rooms. The monitors found no labour rooms at 37 RHCs, operation theaters lacking at 35 centers and no laboratories for conducting medical tests at 21 facilities.

Fifty-two centers did not have backup in case of power cut down; 26 lacked arrangements for drinking water, 133 had no Sui gas and 75 were without landline telephones.

Moreover, five health facilities were without electricity connections and eight had no fans. Four RHCs did not have proper roads leading to them; 25 had no boundary walls and 32 operated out of buildings in a dilapidated condition.

As for patients’ care, 107 facilities were not providing food commodities to vulnerable groups (lactating mothers and malnourished children); 29 had no trained staff for TB patients while 35 lacked such personnel for Control of Diarrheal Disease (CDD) program.

Regarding the sanctioned and appointed positions at RHCs, the average occupancy rate was lower for medical staff (64%) than other staff categories. For paramedical staff this stood at 86%; technical staff (77%) and 92% for support staff.

Eight staffers faced disciplinary action during the June-August quarter. Two doctors and as many administrative personnel, a technician and three peons were penalized for different reasons including poor performance, absence from duty and uncooperative behavior with patients.

During the quarter, government/elected officials made 93 visits to the monitored RHCs with the Executive District Officers (EDOs/Health) making the most visits (63), followed by some other government officials (23), elected representatives (4) and Member National Assemblies (3). RHCs in Punjab had the most such visitors (49), followed by Sindh (23), KP (14), Balochistan (6) and FATA (1).