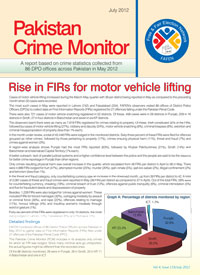 ISLAMABAD, July 31: Cases of motor vehicle lifting increased during the March-May quarter with 39 per district being reported in May as compared to the preceding month when 32 cases were recorded, says a Free and Fair Election Network (FAFEN) report.

The report, released Tuesday, said most such cases in May were reported in Lahore (742) and Faisalabad (234).

There were also 721 cases of motor vehicle snatching registered in 52 districts. Of these, 458 cases were in 26 districts in Punjab, 229 in 16 districts in Sindh, 27 in four Balochistan districts and seven in six districts in KP.

The observers learnt there were as many as 7,619 FIRs registered for crimes relating to property. Of these, theft constituted 32% of the FIRs, followed by motor vehicle lifting (27%), robbery and dacoity (24%), motor vehicle snatching (9%),  criminal trespass (6%) and extortion and criminal misappropriation of property (less than 1% each).

In the month under review, a total of 45,448 FIRs were lodged in the monitored districts. Sixty-three percent of these were filed for offences grouped as ‘other crimes’, followed by those pertaining to property (17%), crimes ensuing physical harm (11%), threat and fraud (7%) and crimes against women (3%).

A region-wise analysis shows Punjab had the most FIRs reported (63%), followed by Khyber Pakhtunkhwa (21%), Sindh (14%) and Balochistan and Islamabad Capital Territory (1% each).

A better outreach, lack of parallel judicial systems and a higher confidence level between the police and the people are said to be the reasons for better crime reportage in Punjab than other regions.

The report said that only crimes resulting in physical harm saw an overall increase in the quarter, which escalated from 48 FIRs per district in April to 58 in May. There were 4,989 FIRs lodged for hurt (47%), attempted murder (25%), murder (20%), accidental death (qatl-i-khata) (5%), accidental death qatl-bis-sabab (2%), illegal confinement (2%) and terrorism (less than 1%).

Out of the total FIRs for threat and fraud, 58% were for counterfeiting currency, cheating (19%), criminal breach of trust (12%), offences against public tranquility (6%), criminal intimidation (5%) and five for fraudulent deeds and dispossession of property.

Besides, 1,226 FIRs were also lodged for crimes against women. These included FIRs for forced marriages (32%), outraging modesty by assault or criminal force (30%), and rape (22%), offences relating to marriage (11%), honour killings (4%) and insulting women’s modesty through word or gesture (1%).

Forty-six percent of the FIRs were registered in only 10 districts, the most being lodged in Lahore (13%), Faisalabad (6%) and Peshawar (5%).