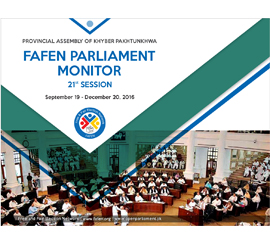 ISLAMABAD, January 4, 2017: The provincial lawmakers of Khyber Pakhtunkhwa Assembly expressed low interest in the proceedings of 21st session that continued for three months, with an interval of 39 days between the two sittings, observes Free and Fair Election Network (FAFEN) in its detailed report.

It was the second longest session of the incumbent Assembly as 21 sittings were held during the reporting period as compared to 80 sittings held in the longest-ever 15th session starting in Oct 2014 and ending in Jan 2016 session.

The session started on September 19, 2016 and concluded on December 20, 2016. On average, each sitting started 36 minutes behind the schedule and lasted an hour and 28 minutes.

The Speaker and the Deputy Speaker remained present during 13 and 20 sittings, respectively and presided over 56% and 41% of the proceedings, while three percent of the session’s time was spent in breaks. Among the Parliamentary leaders, the PML-N lawmaker attended 17 sittings, followed by JI (15), ANP (12), QWP-S (9) and PPPP (5).

The House observed heavy legislative agenda and passed 16 bills. Rules were suspended several times to accommodate non-agenda items, especially resolutions, as the House adopted 17 resolutions during the entire session. None of the adopted resolutions was on the List of Business.

According to Rule 124 of the Rules of Procedure of Khyber Pakhtunkhwa Assembly, a Private Member, who wishes to move a resolution, shall give fifteen days’ notice of his intention to do so and shall submit, together with the notice, a copy of the resolution which he intends to move. However, the members frequently took the advantage of Rule 240, requesting the Speaker to suspend the relevant rules and accommodate their resolutions.

According to FAFEN’s observation, the lawmakers’ attendance remained low throughout the session – with an average of 29 members (23%) present at the start and the same number at the end of each sitting. The quorum was pointed out 14 times during the session while the Chair had to adjourn the sittings on seven occasions. Three sittings remained suspended for 62 minutes after the pointation of quorum by lawmakers. On two occasions, the Chair ignored the call of quorum, however, it was found complete upon counting on two occasions.

The session observed low interest of MPAs in executive oversight as 33 percent starred questions lapsed due to absence of lawmakers while 16 CANs also remained unaddressed.

The House passed 17 resolutions. Three of them condemned the rising trend of violence against women; atrocities in Indian Occupied Kashmir and killing of Muslims in Syria and Burma; while two resolutions expressed grief over Gadani ship wreck and PIA plane crash in Havelian, demanding inquiry into both incidents while two resolutions sought extension in the period of KP Mines & Mineral Development and Regulation Ordinance and KP Police Ordinance.

The remaining 10 resolutions were related to expand entry and exit points of M1 Toll-Plaza; upgrading scale of employees in Irrigation Department; impartial enquiry into the Panama Leaks issue; monitoring of CPEC projects; CNICs blockage by NADRA; eliminate the entry requirements for foreign delegations in KP; give right to transgenders to cast votes in 2018 General Elections; form Minority Caucus in the Provincial Assembly; provide complete information about the recruitments and record of PIA and merge FATA in Khyber Pakhtunkhwa. A resolution about enrolment of children of public servants in public schools was deferred.

The House took up 15 out of 31 Calling Attention Notices (CANs). The taken up CANs were regarding poor drainage system in Bannu; increase in shops’ fair owned by Auqaf Department; dilapidated conditions of schools in Kohat constructed by an NGO; provision of allowance to staff of Provincial Assembly and Civil Secretariat; unhygienic snacks being prepared in factories; upgradation of District Headquarters Hospital, Chitral Buni; provision of logistic support and ambulances to DHQ Hospital, Timergara; non-construction of roads in Chitral; utilization of Rs.17 billion from GP and Pension Fund; strict duty hours of security guards at educational institutions; non-payment of compensation amount to victims of Peshawar Church blast; dispute between the Forest Department and the owners in Malakand Division; suspending Insaaf food security program; problems in Gaddar to Gokand road extension and regularizing female teachers appointed through NTS in their native districts.

Out of 16 CANs that remained unaddressed during the session, six were lapsed; five were not taken up; two were deferred; one was dropped; while one was withdrawn by the mover and one remained pending.

Sponsored by PPPP lawmaker, the House discussed an AM regarding the attempts to revert powers granted to the provinces under 18th Constitutional Amendment. Four members spoke on the subject for 10 minutes. Another AM on the absence of burn centers in major hospitals of the province wad discussed by two lawmakers for eight minutes. It was referred to the relevant committee for discussion. In addition, the House held general debate on China Pakistan Economic Corridor, PIA plane crash and sacrifices of APS victims two years ago.

The lawmakers raised 47 Points of Order (POs) that consumed three hours and 38 minutes. Out of 112 Starred Questions, 58 questions (52%) were taken up and responded to by the relevant ministries/departments, while the legislators raised 28 Supplementary Questions to gain further clarity on government’s responses.

Two instances of walk outs were witnessed during the session. The entire opposition staged a walkout for two minutes during the third sitting when the Chair did not allow an ANP lawmaker to speak on a police related matter. Similarly, the opposition lawmakers staged another walkout for 15 minutes during 13th sitting against the Chair’s attitude for not allowing a PML-N lawmaker to speak on a Point of Order.

A PTI lawmaker lodged protest by sitting in front of the dais for five minutes during 18th sitting against non-allocation of development funds and for not getting royalty on natural gas. The opposition lawmakers protested in front of the Chair’s dais for five minutes during last (21st) sitting, as the Speaker did not allow a PTI lawmaker to speak on a Point of Order.

The House witnessed presentation of seven reports by various committees and adoption of another five reports on the floor of the Assembly.