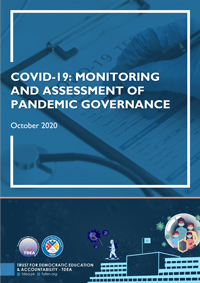 ISLAMABAD, December 4, 2020: With the emergence of the second wave of the novel Coronavirus, the country may face serious health-governance challenges at both policy and implementation level that, if not addressed, might jeopardise and reverse the gains made in the first phase of the fight against the pandemic.

The first monthly COVID-19 response monitoring report, released by the Trust for Democratic Education and Accountability-Free and Fair Election Network (TDEA-FAFEN), observed an increase in the number of new confirmed cases from 313,431 to 333,970 and 324 deaths (rising from 6,499 to 6,823 dead) during October, 2020. This report is based on the data collected through stakeholders’ surveys and direct observation of enumerators deployed in 20 project districts.

The sense of urgency for a more serious and focused response by the government is not only dictated by the rampant increase in infections but also by the state of critical factors such as limited infrastructural capacity at the district level, need for capacity building of first-line responders, as well as stakeholders like members of civil society organisations (CSOs) and journalists.

Following are the key findings of the report:

While the usual challenge of limited resources remained relevant, efforts to control the second wave of COVID-19 infections have to contend with increased politicization and lack of adherence to the SOPs among the general public as major policy challenges — factors that were not as significant during the first wave of the pandemic.