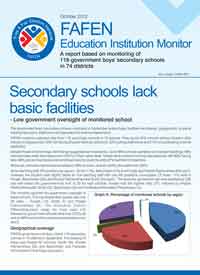 Despite these shortcomings, the findings suggested some positives. Up to 98% schools operated out of proper buildings, 86% had boundary walls and classrooms of 97% of them were clean. Ninety-seven percent schools had electricity with 89% having fans; 96% percent had desks and benches/chairs for students while 97% had them for teachers. Moreover, services of peons were available in 98% schools; cleaners (94%) and watchmen (84%). As for teaching staff, 9% positions lay vacant – Sindh (17%), Balochistan (7%) and Punjab and Khyber Pakhtunkhwa (6% each).

However, the situation was slightly better for non-teaching staff with only 6% positions unoccupied. Of these, 11% were in Punjab, Balochistan (8%) and Khyber Pakhtunkhwa and Sindh (3% each). The students-per-teacher ratio was satisfactory (26) and well below the government-set limit of 50 for high schools. Punjab had the highest ratio (27), followed by Khyber Pakhtunkhwa (26), Sindh (22), Balochistan (20) and Federally Administered Tribal Areas (15).

The monitors reported low government oversight of these schools. The July-September quarter saw only 26 visits- – Punjab (13), Sindh (7) and Khyber Pakhtunkhwa (6). The Executive District Officers/Education made the most visits (15) followed by government officials other than EDOs (9) and an MPA and another elected representative (one each).