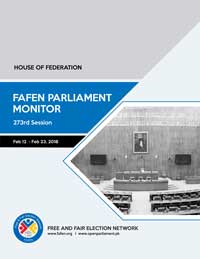 The session comprising 10 sittings also adopted seven resolutions and took up eight Calling Attention Notices (CANs). With an average of 9% Senators present at the start and 16% at the end, each sitting lasted for average two hours and 35 minutes. A maximum of 57 (55%) members, on an average, attended the session along with the presence of two minority Senators.

On average, each sitting started four minutes behind the scheduled time. The Chairman attended nine sittings and presided over 63% of the proceedings. The Deputy Chairman attended one sitting but did not preside the proceedings.  The members of the Panel of Presiding Officers also presided over 36% t of the session while the remaining one percent of the session was consumed in a break.

Legislation: The House passed six bills including five private members’ bills during the session. Brief detail of the bills approved by the House is given below:

The Regulation of Generation, Transmission and Distribution of Electric Power (Amendment) Bill, 2017

The bill provides for strengthening of National Electric Power Regulatory Authority (NEPRA) as a world class regulatory authority with sophisticated and efficient capacity to establish tariffs and set the foundation for a competitive bidding process.

The bill seeks to discourage the dissemination of indecent content or messages to people who are above the age of 20 years by increasing the punishment for such acts.

The bill provides for protection of witnesses and persons concerned with the trial of anti-terrorism cases.

The Prevention of Cruelty to Animals (Amendment) Bill, 2018

The bill seeks to ensure stricter punishments for the protection of animals from human brutality and suggests to increase fine to those involved in this act.

The bill seeks to decriminalize suicide attempted under depression provide for the state protection to such persons. The bill envisages that the survivors of suicide attempts should be provided treatment instead of any punishment.

The bill seeks to regulate the recruitment and conditions of services of persons appointed in National Assembly Secretariat.

The House witnessed introduction of a government bill namely the Corporate Rehabilitation Bill, 2018 and a private member’s bill the Members of Parliament (Salaries and Allowances) (Amendment) Bill, 2018. These bills were referred to the relevant committees.

The Senate rejected a motion seeking permission of the House for delayed presentation of the Capital Development Authority (Amendment) Ordinance, 2018.

Resolutions: The House adopted seven resolutions during the session. Four of these were condolence resolutions expressing the grief over demise of Senator Haji Saif-ullah Khan Bangash, former Senator Mir Hazar Khan Bajarani, former Senator Abdul Majeed Qazi and renowned lawyer Asma Jahangir. The House also recommended the government to stop the process of delimitations of constituencies in FATA for next general elections, encourage teaching of Chinese language and set up separate branches of the National Bank of Pakistan in Tehsils Dadak and Kangri of District Musakhel. A resolution sponsored by PTI lawmaker recommending fresh survey for Benazir Income Support Program was dropped due to his absence. A resolution of PML-N lawmaker urging the government to control pollution in the industrial areas of Islamabad was deferred on request of the mover.

Motions: The Senate held discussion on two out of five Motions under Rule 218 while two motions were deferred on the request of the movers and one was dropped. The motions were related to the banning the issuance of licenses for automatic weapon and increase in cases of child abductions, rapes and murders.

Calling Attention Notices: The lawmakers raised nine Calling Attention Notices (CANs) highlighting the issues related to failure of Private Educational Institutions Regulatory Authority (PIERA) to control the behavior of private educational institutions’ administration in Islamabad, non-availability of child psychiatrist in the hospitals in Islamabad, halting flight operations of PIA to Kuwait and Oman, foreign media campaign on free Karachi, delay in supply of new cars, privatization of Pakistan International Airlines (PIA) and Pakistan Steel Mills (PSM), delay in National Finance Commission (NFC) Award,  difficulties being faced by the Kalash Community and delay in payments to Frontier corps personnel who took part in Zarb-e-Azb Operation. Another notice regarding disparity in the pay scales of Junior and Senior clerks was not taken up.

Questions: The House held Question Hour during seven sittings of the session. As many as 193 Starred Questions were listed for answers. A written as well as oral answer is required for a Starred Question. However, the House took up only 50 (26%) Starred Questions for oral answers. The remaining questions were not answered during the proceedings either due to the absence of relevant lawmakers, chairing of the session by a member of panel of Presiding Officers who sponsored questions or due to the conclusion of Question Hour. The lawmakers asked 135 supplementary questions as well for elucidation of the answers.

The lawmakers’ questions were addressed to 31 ministries or departments of the government including the Ministries of Finance (26), Interior (16), Capital Administration and Development Division and Energy (15 each), Water Resources (14) and Aviation Division (13). As many as 23 lawmakers, including six women, exercised their right to ask questions. As many as six out of these lawmakers belonged to PPPP, PML-N, (5) and PTI (4).

Adjournment Motions: The lawmakers submitted seven Adjournment Motions (AM) during the session. The Chair admitted two of these AMs regarding increase in the petroleum prices and Pakistan’s greenhouse emissions and its effects on the environment for discussion. The House discussed these matters during fourth and ninth sitting, respectively.  Out of the remaining AMs, one was rejected, and two were dropped due to absence of the movers. Moreover, the Chair directed to dispose of an AM on the subject of an agreement between Senate Parliamentary Leaders and Statistics Division while one AM regarding Free Karachi campaign was clubbed with a CAN on the similar subject.

Walkouts: The House witnessed seven incidents of walkouts throughout the session. The opposition parties jointly staged walkouts during fourth, seventh and 10th sittings against increase in prices of petroleum products and absence of the government ministers from Senate proceedings.

Reports: The standing committees of the House presented 29reports on various issues referred to the committees by the House. The House passed 15 motions to grant extensions to committees for presentation of their reports. The Chairman did not permit to lay the report on the Area Study Centres (Amendment) Bill, 2017 and sent the bill back to Standing Committee on Federal Education and Professional Training with the direction to either accept, reject or amend the bill.