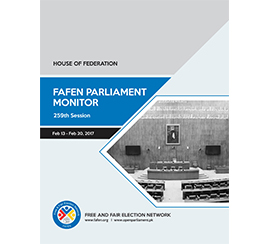 ISLAMABAD: The Senate disposed of heavy agenda during six sittings of 259th session held between February 13, 2017 and February 20, 2017, and passed three bills, including two private members’ bills, and the Hindu Marriage Bill, 2016. The House also adopted 11 resolutions, besides witnessing introduction of 16 legislative proposals that were referred to the relevant standing committees during the reporting period.

The Chairman in his ruling, rejected the government’s decision to place five regulatory bodies under the administrative control of the respective ministries without approval of the Council of Common Interests (CCI).

The House also held an in-camera briefing on the law and order situation in the country, especially in the wake of terrorism related incidents in Lahore, Peshawar and Sehwan Sharif. Minister of State for Interior and Narcotics Control gave in-camera briefing to the lawmakers on the terrorist attacks that continued for an hour and 31 minutes.

The Chair informed the legislators under Rule 100 read with rule 166(3) that time given to the standing committees to report on the bills – Trafficking in Persons Bill, 2016; the Smuggling of Migrants Bill, 2016; the Pakistan Penal Code (Amendment) Bill, 2016; the Islamabad Restriction on Employment of Children Bill, 2016 and the Pakistan Penal Code (Amendment) Bill, 2016 (Amendment in section 364A) – had expired and the movers might bring motions for the consideration of their bills. Rule 166 (3) states that if a committee does not present its report within the period prescribed, or the time allowed, the bill, subject or matter referred to it may be considered by the Senate, without waiting for the report, upon a motion by any member or by the minister concerned and such bill, subject or matter shall be treated as withdrawn from the committee.

With an average of 21% Senators present at the start and 13% at the end of each sitting, the session transacted most of the agenda, appearing on the Orders of the Day. A maximum of 66% members, on average, attended the session along with the presence of one minority lawmaker.

Each sitting, on average, started one minute behind the schedule and continued for three hours and 38 minutes. The Prime Minister did not attend any of the sittings. An effective system of governance is the one where elected Head of the Government is engaged in the parliamentary interventions on a regular basis. Sub-rule (2A) of Rule 61 of the Rules of Procedure and Conduct of Business in the Senate states that the Chief Executive shall attend the Prime Minister’s Zero Hour (last hour of the sitting) at least once a week when the Senate is in session.

The Leader of the House attended 64% of the session’s time, while the Opposition Leader did not attend any of the sittings.

The parliamentary leaders of PkMAP, PML-N, and PML-F attended all sittings, followed by BNP-M, ANP, JUI-F (5 each), MQM, PTI, PPPP, JI (4 each), BNP-A (3) and PML (2) sittings. Parliamentary leader of NP did not attend any of the sittings.

The House passed two private members’ bills, including the Federal Board of Intermediate and Secondary Education (Amendment) Bill, 2016 and the Prohibition of Corporal Punishment Bill, 2016 while one government bill the Hindu Marriage Bill, 2016 – was also passed by the House.

Two bills, including the Alternate Dispute Resolution Bill, 2017 and the Islamabad National Hospital Bill, 2017 were deferred while the Constitution (Amendment) Bill, 2016 (Amendment of Article 28) was rejected by the House. The copy of Money Bill, the Rulers of Acceding States (Abolition of Privy Purses and Privileges) (Amendment) Bill, 2017 was presented to make any recommendations to the National Assembly. Later, the House adopted the report of Finance Committee regarding Money Bill.

The House adopted 11 resolutions during the reporting period. These were related to the appointment of a foreign Minister; achievement of targets of Sustainable Development Goals (SDGs); establishing separate counters for women in all regional passport offices; operating PIA flights between Peshawar and Lahore and to change the present timings of PIA flights from Karachi to Peshawar; expressing grief and sorrow over the sad demise of famous writer Bano Qudsia; condoling death of former Education Minister of Sindh, Dr. Hamida Khuhro; enhancing role and powers of the Senate of Pakistan to protect the rights of the federating units; payment of compensation to heirs of martyrs of terrorist attacks in Quetta; condemning casualties and injuries during bomb blast in Parachinar; implementing jobs quota for Khyber Pakhtunkhwa and Balochistan and establishing a Federal Food Authority.

One resolution was dropped due to the absence of sponsor and related to the strengthening of the Wafaqi Mohtasib office to provide effective and prompt remedial measures against inefficiency and maladministration in the Federal Government Departments. Another resolution about plantation on Margalla Hills was deferred on the request of the mover.

The Chair did not admit eight Adjournment Motions (AMs) for being in contravention with the rules, while four AMs were withdrawn by their movers.

The House took up six Calling Attention Notices (CANs), including problems being faced by the consumers across Hazara Division due to the closing down of 120 CNG stations; illegal sale of unhygienic milk; the non-availability of life saving drugs; termination of services of 21 Trainee Apprentices (BPS-7) before induction in Survey Training Institute, Islamabad; transfer of PIAC into PAL and non-completion of Takht Bhai fly-over in Khyber Pakhtunkhwa. A CAN regarding sale of PIA Airbus A-310 to a German Firm in violation of PPRA rules was referred to the relevant committee.

Seven motions under Rule 218 were discussed, which were related to the performance of cellular companies; implementation on NAP; technical training to street children; procedure being adopted by the government to obtain foreign loans and their utilization; performance of Higher Education Commission; impact of mal-nutrition and stunting and reported failure of PEMRA to stop airing of the material promoting sectarian violence on various TV channels. The discussion on two such motions was deferred while one motion was dropped.

Under Rule 196 (1), the House took up two reports of various committees regarding placement of regulatory authorities under the line ministries and the privatization of Heavy Electrical Complex (HEC).

The House deferred debate on a bailout package for Pakistan Steel Mills, following a motion under Rule 60 till the reply from the relevant minister.

The House passed two separate motions under Rule 126 (7) to consider the Un-attended Orphans (Rehabilitation and Welfare) Bill, 2016 and the Torture, Custodial Death and Custodial Rape (Prevention and Punishment) Bill, 2015 in the joint sitting. Both the bills were passed by the Senate and transmitted to the National Assembly for their passage within 90 days.

A Privilege Motion of PkMAP lawmaker kept pending against the Ministry of SAFRON for not implementing the report of the Standing Committee on SAFRON which was duly adopted by the House.

A total of 46 out of 136 (34%) Starred Questions were taken up on the floor of the House, while Senators raised another 131 Supplementary Questions. Of these, 20 questions were related to the Ministry of Interior and Narcotics Control and Ministries of Finance and Capital Administration and Development Division (12 each); Aviation Division (11); Ministries of Planning and States and Frontier Regions (10 each).

The lawmakers raised 52 Points of Public Importance consuming 165 minutes of the session’s time. Three instances of walkouts by the opposition lawmakers were witnessed during the session. They were related to the dropping of FATA reforms from the agenda of Federal Cabinet meeting, unsatisfactory reply of a question related to the Ministry of Water and Power and lack of interest by Cabinet members in the proceedings of the House.