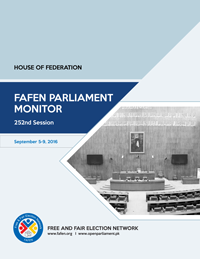 ISLAMABAD, September 9, 2016: The 252nd session of Senate concluded here on Friday without any legislation and adopted two supplementary resolutions on the agenda, says Free and Fair Elections Network in its session report.

Two supplementary resolutions were adopted by the House which were about paying tributes to the sacrifices of the Armed Forces on the Defence Day of Pakistan and condemning terrorism activities in Quetta and Mardan.

The House did not take up five resolutions on the agenda other than the resolution to condemn the Quetta incident. These resolutions were about placing Pakistan Meteorological Department (MET) under administrative control of the Ministry of Climate Change; controlling price hike in the country; making necessary legislation in provinces to regulate the Mental Health Act and taking up the matter at international forums about Indian support to some separatist elements in Pakistan as claimed by Indian Prime Minister.

None of three Adjournment Motions on the agenda was admitted for discussion. Out of six Calling Attention Notices (CANs), the House took up three notices about the delay in release of non-development funds to the newly established Islamabad Metro Politian Corporation, decline of sports in the country and two per cent increase in 80,000 registered drugs/ medicines by the Drug Registration Board.

A CAN about reduction of 50% in the funds of Federal Flood Commission by the Federal Government was deferred on the request of the mover while two other notices about the emergence of new circular debt of Rs. 250 to 300 billion and non-regularization of two hundred contractual employees of Pakistan Council of Research in Water Resources (PCRWR) for the last ten years were not taken up due to ministerial absence.

Seven lawmakers participated in the debate on a Motion of Thanks to express gratitude to the President for his address to both Houses of the Parliament assembled together on June 1, 2016. The legislators spoke on it for 85 minutes.

The House adopted two reports under Rule 196 (1) after their presentation in the House. The first report was about establishment of permanent Secretariat of CCI—a Constitutional Requirement and other about public petition No. 1040 submitted by daily wages Lecturers and Junior Lady Teachers serving under Federal Directorate of Education, Islamabad.

Chairman Committee on Delegated Legislation presented  quarterly  report as  required under sub-rule  (3) of rule 172E of  the Rules of Procedure and Conduct  of Business in the Senate, 2012.

The House did not take up five motions under Rule 218 regarding procedure to utilize foreign loans with the approval of Parliament; problems after closure of Khokhrapar Border with India; promoting knowledge based economy in the country; rotation policy of the Government for PAS/PSP officers and plight of Pakistani labourers in Saudi Arabia.

With an average of 21% Senators present at the start and 17% at the end of each sitting, the session comprising five sittings and witnessed one prayer break for 19 minutes.

On average, each sitting started with a delay of four minutes and lasted three hours and 36 minutes. The Prime Minister did not attend any of the sittings. An effective system of governance is the one where elected Head of the Government gets engaged in parliamentary interventions on a regular basis. Sub-rule (2A) of Rule 61 of the Rules of Procedure and Conduct of Business in the Senate also states that the Chief Executive shall attend the Prime Minister’s Zero Hour (last hour of the sitting) at least once a week when the Senate is in session.

As the Chairman Senate is serving as Acting President, a member of Panel of Presiding Officer chaired the sittings for 98% of the session’s time. The Deputy Chairman attended one sitting and chaired 2% of the proceedings.

The House witnessed presentation of 18 reports of the various committees of which one was of Functional committee on Human Rights on the Protection Against Harassment of Women at Workplace (Amendment) Bill, 2016.

Three reports of the Functional Committee on Government Assurances and one report about budgetary allocation and its utilization in respect of Finance Division, Privatization Division, Auditor General of Pakistan and Central Directorate of National Savings, in terms of sub-rule (4) of rule 166 of the Rules of Procedure and Conduct of Business in the Senate, 2012 were also presented.

Under Rule 265 (A), three periodical reports were presented , one was deferred and ten reports were not presented. The ministerial response on three matters of public importance also came while six matters of public importance consumed nine minutes of the proceedings.  extensive loadshedding of electricity in Nusrat Colony, Hyderabad, due to the disconnection of twelve transformers at a time which resulted into death of four people

A total of 73 out of 104 (70%) Starred Questions were taken up on the floor of the House, while Senators raised another 86 Supplementary Questions.  The quorum was pointed out for three times resulting which a sitting had to be adjourned due lack of quorum while two other sittings resumed after the Chair ordered the bells to be rung for five minutes.

Four instances of walkouts- one in first sitting and three in fourth sitting – were witnessed for a total of 269 minutes. In the first sitting, the entire Opposition and Treasury lawmakers, including PkMAP, NP, FATA Senators and a PML-N legislator walked out of against ministerial absence. and did not return to the House until the adjournment of the sitting at 1904 hours.

In fourth sitting, the entire opposition, few lawmakers of PkMAP as well as PML-N walked out of the House for eight minutes against refusal of the government to provide offices to the Parliamentarians who do not hold any office.

A PkMAP lawmaker in the same sitting walked out of the House at for not taking up his question while a BNP-M lawmaker staged walk out at 1722 hours after terming the reply of Minister for Information on a Point of Public Importance unsatisfactory.