Shortage of Medical Staff for Women at THQs 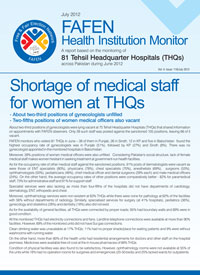 About two-third positions of gynecologists were lying vacant at 75 Tehsil Headquarter Hospitals (THQs) that shared information on appointments with FAFEN observers. Only 39 such staff was posted against the sanctioned 105 positions, leaving 66 of it vacant. FAFEN monitors who visited 81 THQs in June – 38 of them in Punjab, 26 in Sindh, 12 in KP and five in Balochistan found the highest occupancy rate of gynecologists was in Punjab (51%), followed by KP (27%) and Sindh (8%).

There was no gynecologist appointed in the monitored hospitals in Balochistan. Moreover, 39% positions of women medical officers were also unfilled. Considering Pakistan’s social structure, lack of female medical staff makes women hesitant in seeking treatment at government-run health facilities. As for the occupancy rate of other medical staff against the sanctioned positions, 91% posts of dermatologists were vacant as were those of ENT specialists (80%), physicians (78%), chest specialists (70%), anesthetists (69%), surgeons (53%), ophthalmologists (50%), pediatricians (46%), chief medical officer and dental surgeons (29% each) and male medical officers (24%). On the other hand, the average occupancy rates of other positions were comparatively better – 82% for paramedical staff, 73% for administrative staff and 91% for support staff. Specialist services were also lacking as more than four-fifths of the hospitals did not have departments of cardiology, dermatology, ENT, orthopedic and chest.

Moreover, ophthalmology services were non-existent at 63% THQs while there were none for pathology at 62% of the facilities with 56% without departments of radiology. Similarly, specialised services for surgery (at 41% hospitals), pediatrics (36%), gynecology and obstetrics (28%) and dentistry (16%) also did not exist As for the availability of general facilities, all THQs were connected by proper roads; 95% had boundary walls and 89% were in good condition. All the monitored THQs had electricity connections and fans. Landline telephone connections were available at more than 90% facilities. However, 69% of the monitored units did not have Sui gas connections. Clean drinking water was unavailable at 17% THQs; 11% had no proper shade/place for waiting patients and 9% were without washrooms with running water.

On the other hand, more than 80% of the health units had residential arrangements for doctors and other staff on the hospital premises. Medicines were available free-of-cost at the in-house pharmacies of 99% THQs. Condition of physical facilities was also found to be satisfactory. However, ophthalmology rooms were not available at 55% of the units while 16% had no operation rooms for surgeries and emergencies (20-50 beds) and 25% lacked wards for outpatients.