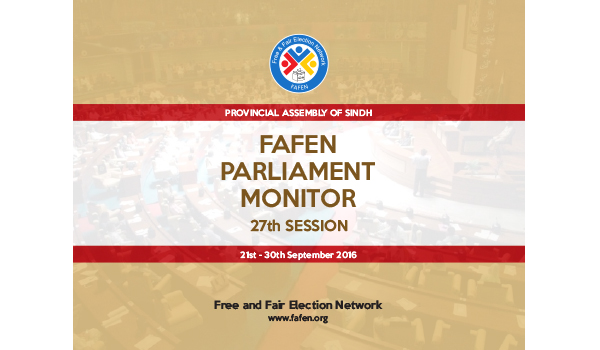 The Provincial Assembly of Sindh passed five treasury bills and adopted eight resolutions amid low attendance of lawmakers during its 27th session, while the issue of governance remained the most deliberated issue, followed by provincial development and law and order situation in the province.

The reporting session comprising eight-sittings was summoned on September 21 and prorogued after nine days on September 30, 2016. It was marked by low attendance of members as on average 35 (20%) lawmakers were present at outset and 61 (48%) at adjournment of the sitting. Each sitting, on average started 25 minutes late and lasted three hours and three minutes. The fourth sitting was the longest one that consumed three hours and 50 minutes while the third sitting was the shortest that continued for an hour and 50 minutes.

The House took breaks during the sittings that consumed 45 minutes (3%) of the session time. The longest break for 30 minutes was taken during the fifth sitting due to lack of quorum. The House also had 15 minutes prayers break during five sittings.

The Parliamentary Leader of PTI attended all the eight sittings while the leaders of PML-F and PML-N attended seven and five sittings, respectively.

Lawmakers tabled 11 resolutions either jointly or individually during the session, of which eight were adopted by the House. The adopted resolutions were regarding condemnation of MQM’s founder Altaf Hussain’s anti-Pakistan statement, condemnation of human rights violations in Occupied Kashmir by Indian Army, transparent inquiry against the Prime Minister on Panama leaks, action against K-Electric for excessive billing, load-shedding and other malpractices, establishment of medico-legal center in private hospitals, declaration of Sindhi as national language, tributes to the martyrs of ‘Movement for Restoration of Democracy (MRD)’ in 1983 and 1986 and tributes to two soldiers of Pakistan Army who embraced martyrdom as a result of Indian firing at the Line of Control (LoC). All these resolutions were taken up as supplementary agenda.

Two resolutions regarding Zebra crossing on all major roads and streets of Karachi and upgradation of Government College of Technology, Hyderabad as Public Sector University, were not taken up due to the absence of their movers. Another resolution tabled by PTI lawmaker demanding the apex court and Election Commission of Pakistan (ECP) to disqualify the Prime Minister on Panama leaks was rejected by the House.

As many as 26 out of 29 Call Attention Notices (CANs) appearing on the list of business were taken up and responded to by the government representatives. Ten CANs were related to the subject of Local Government, followed by Health (4), Home, Education and Literacy (three each), Sports (two), Planning and Development, Environment, Irrigation and Auqaf (one each).

Lawmakers belonging to MQM moved 22 motions to amend the Rules of Procedure and Conduct of Business that appeared on the List of Business during Private Member’s day but none of them was taken up because of early adjournment of the sitting due to lack of quorum.

The lawmakers also raised 62 Starred Questions seeking responses from various government departments, of which 36 were taken up and responded to by the relevant ministers. In addition, lawmakers asked 167 supplementary questions on the floor of the House. MQM lawmakers took the lead in raising questions and asked 50 Starred Questions while PML-F female lawmaker asked nine while three questions were raised by a PTI lawmaker.

Lawmakers raised 24 Points of Order (POs) that consumed an hour and seven minutes of the session time. The highest number of POs (7) was raised during the first sitting consuming 15 minutes, while one PO consumed two minutes each of the proceedings time during fourth, sixth and last (eight) sittings. In addition, one Matter of Public Importance was raised during the sixth sitting.

Four reports of the standing committees on various bills and two audit reports on government accounts were presented during the session, while two more committee reports appearing on the agenda remained unaddressed.

The lawmakers belonging to MQM and PPPP moved five private motions on various governance issues. However, the House left all these motions unaddressed due to lack of quorum.

Lawmakers belonging to MQM and PTI sponsored two Privilege Motions (PMs) of which, MQM-sponsored PM was withdrawn by the mover while the motion by PTI lawmaker was rejected by the House. In addition, members belonging to MQM moved four Adjournment Motions during the session, followed by PML-F (3) and PTI (1). Two motions were rejected by the House while the remaining six motions remained unaddressed due to the absence of their movers.

Four incidents of protest and two walkouts by lawmakers were observed during the session that consumed 22 minutes of the session time. The first incident occurred during second sitting when the entire opposition protested for one minute against the immediate passage of Sindh Sacked Employees’ (Reinstatement) Bill, 2016. On the second occasion, lawmakers belonging to MQM and PTI protested for two minutes against the attitude of the Deputy Speaker for not allowing them to speak on a resolution.