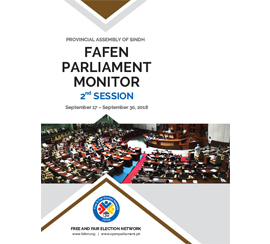 ISLAMABAD, October 1, 2018: As many as 93 out of 165 (56%) sitting lawmakers participated in the general discussion on budget 2018-19 held during the second session of the Provincial Assembly of Sindh, observes Free and Fair Election Network (FAFEN) in its Session Report.

The House met for 46 hours and 36 minutes cumulatively during eight sittings held between September 17, 2018 and September 30, 2018. Of this cumulative duration, two hours and 50 minutes were lost in suspension of proceedings due to prayer breaks. Each sitting started 56 minutes behind its scheduled time and continued for five hours and 49 minutes, on average. Every sitting had an average 63 (38%) lawmakers present at the commencement 80 (48%) lawmakers at the adjournment. Moreover, an average five out of nine minority lawmakers were present in every sitting. The Leader of the House attended nearly 47% of the proceedings (21 hours 44 minutes) and was present in five out of eight sittings. The Leader of the Opposition, notified on September 24, 2018, attended four sittings. The Speaker was present in every sitting and presided over 66% proceedings (30 hours and 46 minutes) while the Deputy Speaker attended seven sittings and presided over 28% proceedings (13 hours). The parliamentary leaders of the parties represented in the House were nominated during the session.

During the first sitting, the Chief Minister, who also holds the portfolio of Finance, presented the provincial budget of total outlay PKR 1144.5 billion for the remaining nine months of ongoing financial year 2018-19. His budget speech consumed for 56 minutes of the proceedings. It was the first budget of the current Assembly elected in July 2018 and is eleventh consecutive budget by PPPP which is ruling the province since 2008.