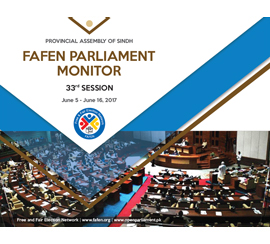 ISLAMABAD, June 20, 2017: Nearly 60% of the lawmakers contributed to the budget debate during the Sindh Assembly’s 33rd session, as compared to the legislators of the Provincial Assemblies of the Punjab and Khyber Pakhtunkhwa where this ratio remained 21% and 37%, respectively, observes Free and Fair Election Network (FAFEN) in its Session Report.

The comparison with the Balochistan Assembly Budget Session could not be done as the Assembly is in session.

Sindh Chief Minister Syed Murad Ali Shah, who holds the portfolio of Finance as well, presented Rs1.04 trillion provincial budget for the fiscal year 2017-18 and it was the 10th consecutive budget of the PPPP government since 2008 general elections. The Sindh Finance Bill, 2017 was tabled during the first sitting and was passed during the 9th sitting after having discussion on it for 31 hours and 12 minutes. The House approved 153 Demands for Grants for the year 2017-18 and rejected 732 Cut Motions while it also gave approval to 82 Supplementary Demands for Grants for the year 2016-17 by setting aside 219 Cut Motions.

A total of 68 lawmakers (40% of the current membership – 167) did not contribute to the general discussion on the budget. Eight among them were female legislators while 60 were male lawmakers. Among the non-participating female lawmakers, four represented MQM while as many were from the PPPP. Similarly, the break-up of 60 non-participating male members were PPPP (32), MQM (22), PML-N (3), and one each from PML-F, NPP and PTI.

Of the 99 members taking part in the budget debate, 77 were male and 22 were female lawmakers. The female legislators were found to be more active as compared to their male counterparts, as 73% (22 out of 30) of them expressed their views on the budgetary proposals while 56% (77 out of 137) males contributed to the general discussion on the budget.

The female lawmakers consumed five hours and five minutes of the proceedings while their male counterparts took 26 hours and seven minutes to deliberate upon the provincial budget. Out of 22 participating female members, 13 were from PPPP, followed by MQM (5), PML-F (2) and one each from PML-N and PTI. Likewise, 46 of the male members debating the budget belonged to PPPP, followed by MQM (19), PML-F (6), PML-N (3), PTI (2) and an Independent lawmaker.

The House witnessed five walkouts and as many protests by the opposition lawmakers who also boycotted one of the sittings for not including the schemes recommended by the Local Government representatives during the budget speech of the Chief Minister. The reason behind the protests was their difference with the treasury benchers over the budget figures, Chair’s refusal to allow them speak on some parliamentary interventions and the exchange of hot words with the government lawmakers.

The House witnessed the presentation of the Annual Budget Statement for the year 2017-2018; the Supplementary Budget Statement for the year 2016-2017; the Schedule of Authorized Expenditure 2017-18 and the Supplementary Schedule of Authorized Expenditure 2016-17. The provincial members raised three Points of Order, consuming 10 minutes of the session time.

The nine-sitting 33rd session of the Sindh Assembly began on June 5, 2017 and ended on June 16, 2017, with an average delay in commencement of proceedings by 58 minutes, while each sitting lasted five hours and 14 minutes, on average. Forty-eight members, on average, were present at the outset and 63 lawmakers at the adjournment of each sitting. A maximum of 90 lawmakers were found to be present at one point of the sitting while, on average, seven minority members also attended each sitting.

The Chief Minister attended eight sittings consuming 65% of the proceedings time, while the Leader of the Opposition attended seven sittings consuming 49% of the sitting time. The Speaker chaired 69% of the session; the Deputy Speaker presided over 24% of the time while the remaining proceedings (7%) were consumed in various breaks. Among parliamentary leaders, the PTI and PML-F leaders attended eight sittings each, followed by seven each by MQM and PPPP.