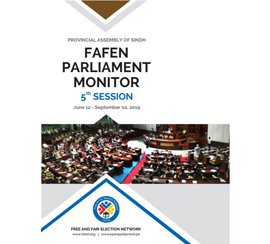 The Provincial Assembly of Sindh transacted half of its scheduled business during fifth session comprising 32 sittings that continued between June 12, 2019 and September 2, 2019. The House witnessed passage of the Sindh Finance Bill, 2019 and as many as 61 percent lawmakers participated in budget debate, observes Free and Fair Election Network (FAFEN) in its session report.

The House proceedings commenced with an average delay of an hour and 29 minutes in each sitting while none of the sitting started on its scheduled time. The House also witnessed ten incidents of protests during the proceedings by treasury and opposition lawmakers who exchanged heated arguments while debating various parliamentary interventions which consumed three hours and 54 minutes (four percent) of the proceedings.

The proceedings remained suspended for an hour and fifteen minutes (one percent) due to the prayer breaks and lack of quorum. The regular as well as supplementary agenda of the House during fifth session comprised six government bills and one private members’ bill, 35 resolutions, 56 Call Attention Notices (CANs), an amendment to the Rules of Procedure and Conduct of Business, 21 private motions, 105 starred questions and five Questions of Privilege. The House passed the Sindh Finance Bill 2019 and adopted eleven resolutions during the session. In addition, four budgetary papers were laid, 61 percent starred questions were responded, 26 CANs were answered, two Adjournment Motions were admitted for discussion and a Privilege Motion was referred to the concerned standing committee.