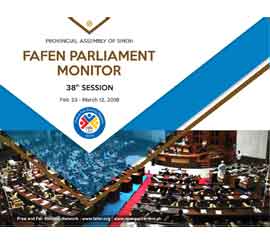 Each sitting, on average, started 90 minutes behind the scheduled time and lasted for two hours and 25 minutes. The longest sitting of the session (third) continued for three hours and 16 minutes while the shortest (first) for 48 minutes. The cumulative duration of 12 sittings was 29 hours and seven minutes. At the commencement of each sitting, 30 (18%) members were present on the average, whereas the average attendance at the time of adjournment of sittings was recorded 36 (22%). On average, five minority lawmakers attended each sitting.

The Leader of the House (Chief Minister) attended two sittings for 50 minutes throughout the session. On the other hand, the Leader of the Opposition was present during five sittings and attended eight hours and 13 minutes (28%) of proceedings.

Among the parliamentary leaders, the PML-F leader was most regular as he attended all sittings. He was followed by the leaders of MQM (11 sittings), PTI and PPPP (10 sittings each) and PML-N (six sittings). The NPP parliamentary leader remained absent throughout the session.

The House also adopted 16 resolutions during the session. As many as half of these resolutions were not part of the Assembly’s regular business, instead, those were moved as supplementary agenda items. The resolutions urged the government to establish a Unit of National Institute of Cardiac and Vascular Diseases (NICVD) in Civil Hospital Sanghar, stop illegal water supply through Chasma-Jhelum Link Canal and Taunsa-Panjnad Canal, take steps to upgrade the posts of lower staff (BPS-01 to BPS-07) in Education Department, declare 20th March as a Public Holiday on the day of martyrdom of Sain Sooryah Badshah, give royalty to oil and gas producing talukas/districts, introduce the concept of “Net Zero Energy Buildings” in major cities of Sindh, establish an Institute of Cardio Vascular Diseases at Mirpurkhas, conduct proper blood screening and observe March 4 as Student Movement Day in honor of the students beaten and arrested on March 4,1969. Moreover, the House did not take up a resolution regarding delay in the work at Drain Nallas at Chotiyaroon Dam.

The supplementary resolutions of the House expressed condolences on the demise of lawmaker Mir Hazar Khan Bijarani, poet and writer Syed Muhammad Ali Shah and a veteran politician Jam Saqi. The House also paid paid tribute to Asma Jahangir and other women activists on the eve of the International Women’s Day. The House condemned the federal government’s plan to privatize PIA and Pakistan Steel Mills and the statement of Chairperson of BISP regarding Benazir Income Support Program in Sindh.

The House witnessed 12 incidents of protests and walkouts by the opposition lawmakers. The on-floor protests consumed 28 minutes of the proceedings. The protests and walkouts were instigated by reservations on government legislation, the Chair’s decision against opposition lawmakers, and verbal clashes among lawmakers. The opposition also protested against a resolution on the privatization of PIA, unsatisfactory reply on Call Attention Notice, remarks of a treasury lawmaker against PML-F.

The House did not hold discussion on any of the 11 Adjournment Motions moved by the PML-F and PTI lawmakers. Ten of these were rejected by majority while one remained unaddressed. Through these AMs, the lawmakers had sought debate on corruption in the development funds for Larkana, dilapidated state of the schools in Sindh, re-appointment of Dr. Asim Hussain as Chairman of the Sindh Higher Education Commission (HEC), eruption of fire at the Sindh Secretariat, future of 470 students of Iqra Fellowship School, stopping salary of 29 employees of Food Department, fund control policy,  high fee structure of private schools, contamination of water in Sindh and embezzlement in purchase of drugs.

The lawmakers submitted 47 Call Attention Notices (CANs) to draw government’s attention to the issues of public importance. Of these, 30 CANs were taken up for answers during the session. The remaining CANs were left unaddressed due to the absence of either the movers or the relevant ministers. As many as 10 CANs were related to the Local Government, five to the Home Department, three to the Health Department, two each to the Education and Literacy Department and Minority Affairs and one each to the Archive department, Culture and Tourism Department, Environment, Irrigation, Livestock and Fisheries, Rehabilitation, Revenue and Transport.  The MQM lawmakers submitted 19 CANs, PML-F lawmakers 11, PML-N lawmakers nine, PTI lawmakers six and PPPP lawmakers two.

The House did not take up any of the nine Private Motions that the lawmakers had submitted to discuss various issues of public interest during the session.

The lawmakers raised six Points of Order (POs) during the session, consuming 41 minutes of the proceedings. The standing committees presented three reports on the Pakistan University, Karachi Bill, 2017; the Sohail University Bill, 2017 and the University of Modern Sciences, Tando Muhammad Khan Bill, 2017. The government laid the Second Quarterly Budget Execution Report for the Financial Year 2017-18 and the Audit Report on the Accounts of the Government of Sindh for the Audit Year 2016-17.

The lawmakers asked a total of 61 Starred Questions from 14 departments of the government during the session. The House took up 46 (75%) Starred Questions for verbal answers during the proceedings while the remaining 15 questions received only written replies. Additionally, the lawmakers asked 199 supplementary questions for further elucidation of the answers. As many as nine starred questions were related to the Prisons Department and six each to the departments of Local Government and Health. Moreover, the lawmakers also quizzed the departments of Food, Information Technology, Planning and Development, Public Health Engineering, Rural Development and Services, General Administration and Community Development.